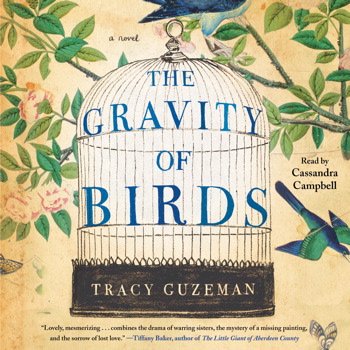 The Gravity of Birds is the debut novel of Tracy Guzeman and it is an intricate novel of jealousy, heartbreak, secrets, and betrayals. I listened to the audiobook version of The Gravity of Birds which is narrated by the wonderful Cassandra Campbell who is a favorite of mine. She has a wonderful voice for storytelling and she drew me into the complexities of this novel in no time making me regret having to stop listening for even a second.

We begin in 1963 when teenage sisters Natalie and Alice are spending part of the summer at their vacation home with their parents. As young girls the sisters had been close but after both girls develop a crush on a brilliant painter Thomas who is living nearby in his parents cottage their relationship becomes forever changed and the secrets and betrayals begin. Shortly thereafter the girls lose their parents and Natalie is forced to be a guardian to Alice who suffers from severe rheumatoid arthritis.

Years pass and we fast forward to 2007 where Thomas is now a very well known and successful artist but for some reason has pretty much gone into seclusion and stopped painting. Out of the blue he contacts Dennis, a professor who is an expert on Thomas’ work and had spent years with Thomas and Stephen, an art authenticator. He stuns them both when he tells them that there is a painting of his still out there. The thing is he not only wants them to find the painting but he also wants them to locate the sisters.

This sets off a chain of events that changes everything. As the men begin to uncover clues as to the whereabouts of the sisters more and more of the plot is revealed. Secrets that have been buried for years surface and betrayals become apparent and shocking. When I began this book I wondered if I would like it because it started a bit slow for me but as the plot unfolded I was fully invested in the story and absolutely riveted to it.  I don’t want to say much more as this is one of those books that needs to be experienced by the reader.  The plot is complex and it would be much too easy to give away a detail that I’d rather not.

So I will leave my thoughts there although I have to say that I think this would make a wonderful book club selection because I’d love to have someone to talk to about the book.  I really enjoyed The Gravity of Birds and would most definitely recommend it especially the audiobook version which I thought was extremely well done!

Buy at:  Simon and Schuster, Audible.com, and iTunes

Source:  Review copy provided by the Publisher.  No compensation was received for this review and all opinions are my own.