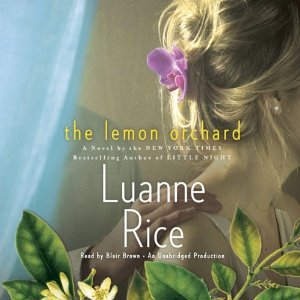 I listened to the audiobook of The Lemon Orchard by Luanne Rice and really enjoyed it. It’s narrated by Blair Brown who is a Tony Award-winning stage actress and that aspect definitely shines through in her storytelling. She was wonderful to listen to with her different accents and the emotion she put into her characters. I look forward to listening to her again! As for The Lemon Orchard – well it’s an emotional story of love, loss, and moving on.

It’s been five long years since Julia’s life fell apart when she lost her daughter and husband in a tragic car crash. While she mourns the loss of her husband their marriage had been over for years but it is her daughters death that she just can’t move on from. So when she has the opportunity to house sit for her aunt and uncle at their home set near a lemon orchard she takes it. As she settles in with her dog Bonnie she hopes to find the peace and solitude she craves in this beautiful setting that she has such good memories of her whole life. It isn’t long though before she notices Roberto who oversees the lemon orchard. He is so handsome and kind but what really draws the two together is their shared loss of a child.

As Julia and Roberto spend more time together Julia learns that Roberto is in the country illegally. He had lost his daughter when they had snuck over the border five years ago and he suffers such guilt. Even more so he has no closure as he doesn’t know if she died or not. For Julia, since she can’t bring back her own daughter feels an overwhelming need to help him find his daughter if she can. The only thing she doesn’t think about is that if Roberto’s daughter is found she may lose him.

The Lemon Orchard was a really good book to listen to. I was completely immersed in this story of hope and healing.

Source:  Personal copy from the library.