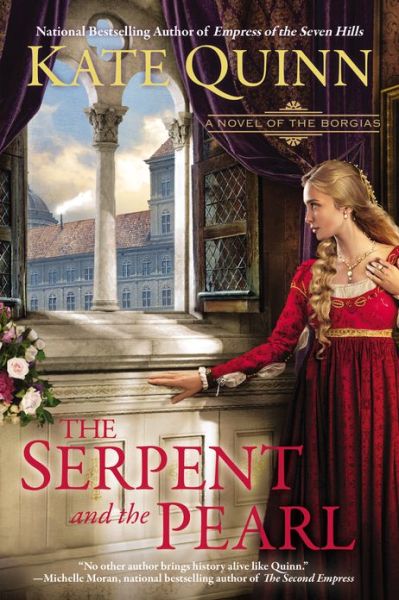 The Serpent and the Pearl is Kate Quinn’s newest novel and it is beyond fantastic! I have read all but one of Kate’s books and loved them but The Serpent and the Pearl is my new favorite. Kate has a way of making historical fiction exciting to read and this novel of the Borgias held me captive throughout. Although well researched the fictional story that Kate weaves around her real life characters brings a period in history literally alive in your mind and I enjoyed every minute.

We go back in time to Rome 1492 and the Borgia family is beginning to rise. It is there we meet Guilia Farnese as she prepares for and is wedded to Orsino Orsini. Nobody is more surprised than Guilia when Orsino fails to bed her on their wedding night. The reason becomes glaringly apparent the next day when Rodrigo Borgia, soon to become Pope Alexander VI, tells her that the marriage was a set up and she is really meant to become his mistress. She is horrified and proceeds to deliver one of her famous slaps but it gets her nowhere. Eventually she gives in and becomes his mistress; even enjoying it despite being constantly referred to as a whore by others. Thus begins their relationship that lasts years and produces a daughter Laura that may or may not be a Borgia.

I loved the characters in this novel – all of them. Guilia was my favorite with her fiery personality. She is known as one of the great beauties of The Renaissance and was known for her beautiful floor length hair. More than that though she was spunky and stood up for herself even when it caused her more trouble than it was probably worth. Then there is the dwarf Leonello who I adored. Being a dwarf he’s always had to fight for himself so being a bodyguard to Guilia seems a natural job and he does it well. Then we have Carmelina who is running away from her past and she captures Guilia’s interest with her amazing cooking skills, especially the sweets. Which is another thing I have to mention and that is all the descriptions of the scrumptious food which I learned in the author’s note was taken from actual surviving Renaissance cookbooks.

Kate’s humor shines through in this novel as I found myself laughing more than once at some of the things that came out of Guilia’s, Leonello’s, or Carmelina’s mouths. As I was going to be busy for the few days I had to read Kate’s novel I splurged on the audio and I’m so glad I did. It is narrated by Leila Birch, Maria Elena Infantino, and Ronan Vibert and they do an amazing job of bringing alive The Renaissance period along with the characters. I would have loved this book in print as well but this audio production is so well done that I felt as though I was right there living within the pages of the story being told.

For lovers of historical fiction The Serpent and the Pearl comes highly recommended. Within its pages you will have the opportunity to learn about the Borgia family while getting a fictional story that is sure to please readers! Another winner from Kate Quinn and even better there is a sequel in the works that I will be anxiously waiting for!

GIVEAWAY DETAILS (Paperback copy – US only)

I have one paperback copy of The Serpent and the Pearl by Kate Quinn up for grabs.  To enter…

This giveaway is open to US residents only (no PO boxes) and I will draw for the winner on August 24/13.  Good luck!

Source:  Review copy provided by the publisher however audiobook was purchased by me.  No compensation was received and all opinions are my own.