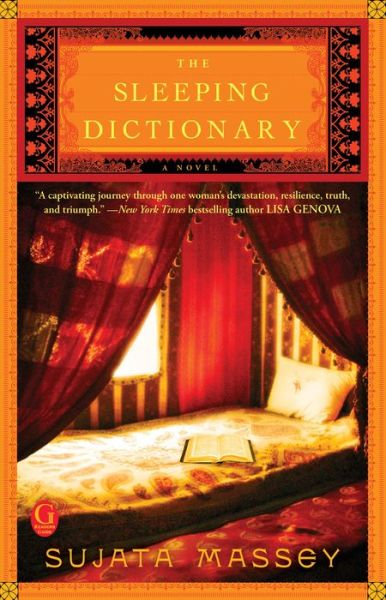 The Sleeping Dictionary by Sujata Massey which just released on Tuesday is a perfect example of a book I chose first because of its cover which I think is beautiful but it’s what is between the covers of this book that the true gem lies. This story at turns broke my heart and made me smile and I know I won’t soon forget it.

It is 1930 and a great ocean wave completely destroys the Bengali village where the young Pom once lived and she’s left an orphan with no where to go. After a few harrowing encounters she ends up at the Lockwood School where she is promptly renamed Sarah and put to work as a servant. The only saving grace being at this school is a well-to-do girl from her past is also attending and they become close. The thing about Sarah though is she wants to read more than anything and sets about to teach herself and does a great job too by reading the dictionary and listening very closely to one of the favorite teachers at the school. For Sarah words are one thing that can never be taken away from her. Unfortunately Sarah’s time at the school comes to an end when she’s accused of something she didn’t do and she sets off on her own.

It is then that she meets Bonnie and is lured because of her naivete and desperation into working as a prostitute in what would be considered a reputable house. It is there she becomes Miss Pamela but she knows this life is not one she can live. It goes against everything she believes in and when the situation becomes unbearable she once again runs. She ends up in Calcutta and it is here her life really changes when she meets Simon Lewis and begins working for him organizing his library which is a dream job for her given her love of books. A romance eventually blooms and it seems that Kamala, the name she now goes by, may just have the life she dreamed of. Yet the dark clouds once again descend on Kamala.

This novel encompasses so many things including the war and politics where Kamala actually becomes a freedom fighter. For me that was my least favorite part. I was more interested in Kamala and the journey her life took. Coming from such a small island she was a very naive girl in the beginning and her upbringing taught her to be seen and not heard. It lent to causing her many problems throughout the years. I admired her though for her yearning to learn and her determination to make a better life for herself.

The novel itself is beautifully written and the author brings this time in history alive – so much so that many times I felt as though I was there living and breathing the same air as her characters. For those who enjoy reading novels descriptive of other cultures, historical fiction, and wartime and political upheaval then The Sleeping Dictionary is one you should try! I really enjoyed this one!

I have one copy of The Sleeping Dictionary by Sujata Massey to share with my readers.  To enter…

This giveaway is open to US residents only (no PO boxes) and I will draw for the winner on September 5/13.  Good luck!