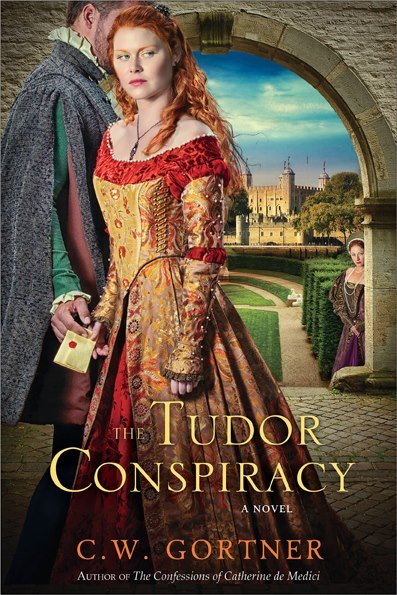 The Tudor Conspiracy is the second book in the Elizabeth I Spymaster Chronicles written by C.W. Gortner. Admittedly I am a huge fan of his having read all but one of his novels and I’ve loved them all but The Tudor Conspiracy was just phenomenal! I was hooked from the first page to the last by this fast paced story that brilliantly weaves historical fact with fiction.

We first met Brendan Prescott in The Tudor Secret and he’s back to once again to protect Elizabeth from the treachery swirling around her. In The Tudor Conspiracy we see the court of Queen Mary through Brendan’s eyes and he paints us a wonderfully vivid picture via Gortner’s creative imagination. Queen Mary has been betrothed to the Prince of Spain and there are people that will do anything to make sure this marriage takes place and any children are protected in order to make sure that Elizabeth never inherits the throne. Consequently there is a plot to do away with Elizabeth as heir to the throne. It’s up to Brendan to uncover the conspiracy before its too late and he will do anything to protect Elizabeth including risk his own life.

I read quite a bit of historical fiction but I have to say that Gortner is one of the best at his craft. He can bring alive a story like none other and while his story may be fictional his facts are well researched and true. I have to mention that it isn’t necessary to have read the first book in the series before indulging in The Tudor Conspiracy. The books stand on their own quite well and enough is explained about Brendan and his past that a reader isn’t left confused. On another note I was lucky enough to get an audio copy of the book from my library and it was awesome. It’s narrated by Steve West who definitely has a knack for bringing excitement to his storytelling. The Tudor Conspiracy is a little over ten hours long and it flew by! I wouldn’t hesitate to recommend any books of C.W. Gortner especially if you are a historical fiction fan!

I have one copy of The Tudor Conspiracy by C.W. Gortner up for giveaway to my readers. To enter…

This giveaway is open to US and Canadian residents only (no PO boxes) and I will draw for the winner on August 17/13.  Good luck!

Source:  Review copy provided by Historical Fiction Virtual Book Tours and the publisher.  Audiobook copy is personal library copy.  No compensation was received and all thoughts are my own.