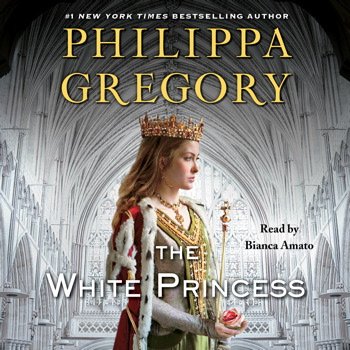 I’ve enjoyed Philippa Gregory’s novels for a while now so I was excited to listen to her newest release The White Princess which is Book 5 in The Cousin’s War series but the book definitely stands on its own just fine as I’ve only read one in the series and it didn’t affect my enjoyment of this one at all. The White Princess is narrated by Bianca Amato who does an amazing job and I think she has the perfect voice for historical fiction. I’ve not had the pleasure of listening to her before but I have a few more audiobooks by her in my library that I will look forward to now. I enjoyed The White Princess especially in audio format and once in a while it’s fun to read a historical novel that is light and enjoyable and gives me a pleasant way to spend a few hours.

The White Princess opens with Princess Elizabeth of York learning that her lover Richard III has been killed by Henry VII’s army. For her this is devastating as she will now be forced into marriage with Henry VII. Gregory spins a tale around this couple in which Elizabeth is taken against her will and until she becomes pregnant Henry refuses to marry her as he wants to make sure he’s getting someone fertile to continue the Tudor line. When she finally conceives they are married and while in the beginning of their marriage she hates him she finds that over time they begin to care for each other.

Life for Elizabeth, even as queen of England, isn’t easy. She has to contend daily with her tyrant of a mother-in-law Margaret de Beaufort who would do anything and everything to ensure that her son stays on the throne. There is also the war between the Yorks and Tudors and there is the constant fear that a York will come out of the woodwork and put a claim on the throne. This led to more than one York supporter losing his life.

Then there was Henry’s insecurities which threatened to overwhelm him constantly. His biggest fear was that one of the boys who had disappeared from the tower was still alive and would come back and claim the throne. He was literally obsessed with this notion and it overtakes his life until he makes some decisions that leave him questioning himself and his humanity.

As I said I enjoyed the novel. If you’re looking for pure facts you won’t find it in this novel but there is no doubt that Gregory can spin a tale that will hold a reader, or listener in my case, captive for hours – fifteen hours to be exact for the audio. I enjoyed reading about Elizabeth of York as I hadn’t read much about her before and my only complaint on her character in this novel would be that she seemed to be weak at times and it would have been nice to see her portrayed in a more lively fashion. I liked her though and I really liked her mother Elizabeth Woodville who was portrayed as strong, passionate, and determined to get a York back onto the throne where she felt they belonged. All in all a really enjoyable read for lovers of historical fiction or fans of Philippa Gregory.

Source:  Review copy provided by the publisher.  No compensation was received and all opinions are my own.