Happy Saturday everyone!  I’ve got a book spotlight today for you on a book entitled Traveling Light by Andrea Thalasinos which sounds so good.  The book is described as “an inspiring story about fate, family, and healing; it also explores the special bond that exists between humans and canines”.  This book is definitely going on my ever growing list of books I want to read being the dog lover that I am.  In the meantime I’ll tell you a bit about the book and author and then give you a chance to win one of two copies for yourself! 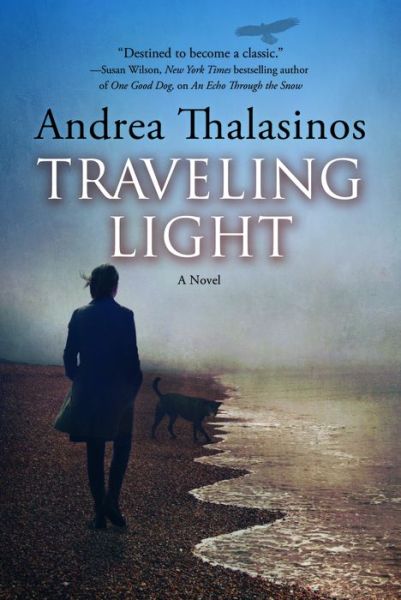 Paula Makaikis is ashamed of her marriage. Driven out of their bedroom by Roger’s compulsive hoarding, she has spent the past ten years sleeping downstairs on her husband’s ratty couch. Distant and uninspired, Paula is more concerned with the robins landing on her office window ledge than her hard-earned position at the university. Until a phone call changes everything.

A homeless Greek man is dying in a Queens hospital and Paula is asked to come translate. The old man tells her of his beloved dog, Fotis, who bit a police officer when they were separated. Paula has never considered adopting a dog, but she promises the man that she will rescue Fotis and find him a good home. But when Fotis enters her life she finds a companion she can’t live without. Suddenly Paula has a dog, a brand-new Ford Escape, an eight-week leave of absence, and a plan.

So Fotis and Paula begin the longest drive of their lives. In northern Minnesota, something compels her to answer a help-wanted ad for a wildlife rehabilitation center. Soon Paula is holding an eagle in her hands, and the experience leaves her changed forever.

Traveling Light explores what is possible when we cut the ties that hold us down and the heart is free to soar.

Andrea grew up in the New York area as the daughter of a Greek American family. Her early love of animals was confined
mostly to luring home stray dogs by surreptitiously feeding them and then trying to keep them hidden from her parents.
Kostantino and Mary were not keen on dogs!

After taking a creative writing course in high school her life was changed. Working in the school library, she’d cut classes and sneak out with an armful of books, hitchhiking down to Jones Beach even in winter to read and write.

Through a quirk of fate she later moved to the northern Great Lakes and began attending the University of Wisconsin Madison where she completed a PH.D. With academic training in sociology, she compares the excavation of history,
people and events to, “discovering diamonds in a place one would never expect, embedded into stories that are yet to be told. It’s exhilarating as information and story weave together to form new ways of seeing previously unexamined or
unknown things.”

She remembers telling a close friend after graduation, “Whew, glad that’s over, now I can write fiction and get a dog!”

Currently, Andrea lives in Madison, Wisconsin where she is anxiously awaiting the publication of her second novel, Traveling Light, scheduled for release on July 16, 2013 by Forge Books, (Macmillan). Traveling Light is available for
pre-order. An Echo Through The Snow was released in August of 2012 and is available for purchase. Andrea is working on her third novel.

I have 2 copies of Traveling Light by Andrea Thalasinos up for grabs.  To enter…

This giveaway is open to US and Canadian residents (no PO boxes) and I will draw for the winners on September 8/13.  Good luck!

Source:  Giveaway provided by publicist.  No compensation was received.