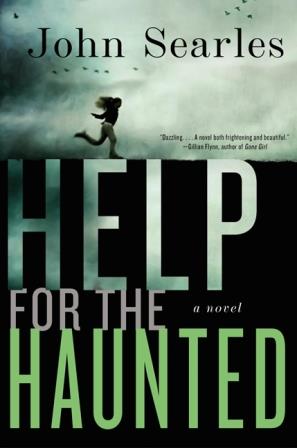 Help for the Haunted by John Searles is an eerily haunting story where the haunted, deeply buried secrets, and mystery abound. I listened to the audio version of the book which is narrated by Emma Galvin. I think she did a great job as her voice has a young quality to it that lent really well to the telling of the story from a young person’s point of view. She kept me engaged in the story and had a perfect tone throughout that matched the storyline.

The story is told from the point of view of the youngest daughter Sylvie. Sylvie has always been the good daughter while her older sister Rose the troublesome one. Now Sylvie’s family has never been considered a normal family as the job her parents have set them apart. They help haunted souls find their way and needless to say most people think they are more than a little strange. So while Sylvie’s parents love her their family is still quite dysfunctional as the kids have always been exposed to this weirder side of life.

Things go very bad when one stormy night Sylvie’s parents go out to meet some mysterious person at an old church and are murdered. Sylvie is left in the care of her sister Rose and believe me Rose doesn’t rise to the occasion, more often than not being mean to her sister.

Sylvie perseveres but the one thing that troubles her is her parent’s murder and the fact that it seems that her sister Rose is a suspect. Since Sylvie’s memories are jumbled from that night she decides to set about unraveling the mystery of what really happened and what she learns shocks her to her core.

I really enjoyed Help for the Haunted especially the audio version. It had all the elements of a story I enjoy with the paranormal aspect, the ghosts, and creepiest of all a very weird doll which makes me very glad I don’t own one or I’d have had to have put it away while reading this book. It was creepy, suspenseful, and last but not least -just what is lurking around in the basement of Sylvie’s house???

This novel covers a lot of territory with the paranormal, family matters, coming of age issues, and a murder. A great bookclub pick I would say!