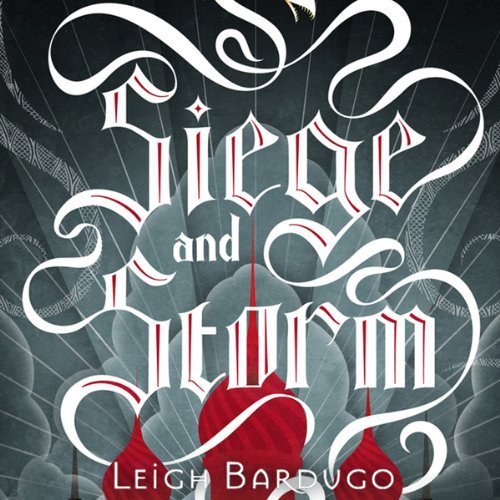 Siege and Storm by Leigh Bardugo is a Young Adult novel and it was a pretty good book to listen to. You have action, adventure, and a great narrator – what could be better? Siege and Storm is narrated by Lauren Fortgang and she does a fantastic job of making you feel as though you are a part of the intricate world that the author has built. I really liked her narration and I’m positive that it led to a greater enjoyment of the book itself. Siege and Storm is the work of a very creative author who imagines a fantasy world that will carry you away on an adventure.

Siege and Storm is a part of The Grisha Trilogy with the first book being Shadow and Bone. Now I somehow missed that this was the second book in the series but truthfully I did not feel lost. The only thing I will say is that I think I would have gotten more from this novel having read the first one because I missed out on a lot of the background likely building up to this second installment. That being said I was still sucked into this book and will definitely watch for the next in the series as well as go back and listen to the first one.

The book begins with a fight between the Darkling and Alina and Mal’s side – good versus evil really. Alina is a Sun Summoner and has powers that make her a valuable ally in any fight. When she agrees to help the king of Ravka fight the Darkling she begins to feel what it is like to have power and she likes it. The only problem is that her new responsibilities seem to be causing Mal to distance himself from her and that she doesn’t like that as she loves him. As the strife increases around them so do the two of them change and not always for the good. Will they manage to find their way back to each other or will each be drawn away in different directions?

That’s about all I can say. This is one of those books that you need to read or listen to and experience for yourself in order to follow it. There is a lot of language that pertains to the world that is being built in the novel but wouldn’t translate well to a review. For the most part I really enjoyed this book and and as I said I plan on following along with the series as this book did spark my interest enough for that. If you enjoy reading books about fantasy worlds with a lot of adventure and drama then you’ll likely enjoy Siege and Storm although I have to say it’s probably a good idea to start with book one first.

I do recommend the audio though and I see the first one Shadow and Bone is also narrated by Lauren Fortgang and really she made Siege and Storm come alive for me. All in all a fairly good listening experience for me!

Source:  Review copy provided by Audible.  No compensation was received for this review and all opinions are my own.