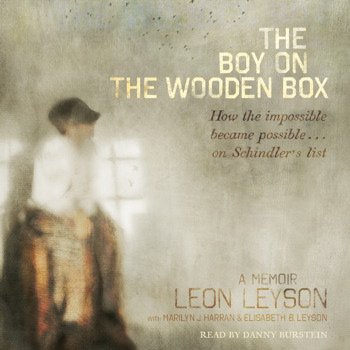 The Boy on the Wooden Box by Leon Leyson is an incredibly moving and powerful memoir. Leon was one of the youngest children to survive the Holocaust on Oskar Schindler’s list and I found the audiobook brought the realities of this time to life in a way a book may not have. The audio version is narrated by Danny Burstein who has the perfect voice for this story with a combination of humility and gentleness that lends well to the telling of such a horrific time. This memoir sent shivers up my spine and more than a few tears in my eyes.

Leon had what could only be described as a happy childhood until the Nazis invaded Poland when he was just ten years old. He and his family were forced from their home to live in a Krakow ghetto and from there to a concentration camp. At thirteen years old and not being a big boy the concentration camp was hard for Leon and having extremely cruel guards who didn’t think twice about inflicting pain on even a young boy it was all the more horrifying. When Leon’s father begged Oskar Schindler to bring Leon to work for him Leon knew he had been saved. While the horrors of being held were still there and starvation was rampant at least the workers were treated with respect by Schindler and quite often he gave extra scraps to Leon when he could. For Leon he feels that Oskar Schindler saved his life … as he did many others.

I have watched the movie version of Schindler’s List more often than I can count and it is no less powerful each time I view it. I feel the same about this book. The audiobook is short at 4 hours and 17 minutes but I was glued to it for each and every second. I can’t imagine being thrown into a concentration camp at such a young age let alone survive it so I have the utmost respect and admiration for Leon and those that did. It takes a special person to be able to survive such horrors – to not give up – to always have hope that there will be a better tomorrow. While Leon lost many loved ones to the war including his brother he survived and he places the reason for his survival on Oskar Schindler. Oskar Schindler is said to be a man who defines heroism which I wholeheartedly agree with but so are those who survived the Holocaust.

Leon said he started his life at nineteen years old when he arrived in America. He went on to have a career, marry, and have children. Sadly he passed in January of 2013 at the age of 83. I’m glad that after all he suffered he had a good life afterwards. If you have a chance to listen to this amazing audiobook and are interested in novels about the Holocaust please pick up The Boy on the Wooden Box. It is truly amazing.