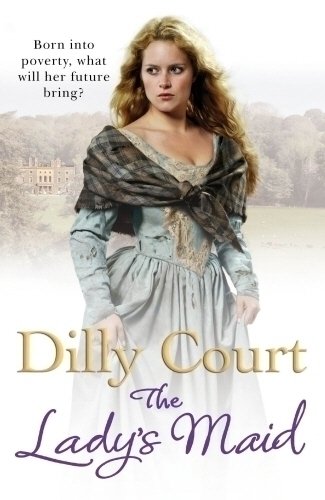 The Lady’s Maid by Dilly Court is one of those books that you just want to curl up in your favorite chair with. Taking place in the English countryside and full of characters you grow to love this story was a delightful way to spend some time – well a bit of time since it is almost 500 pages but they flew by. The Lady’s Maid is a story of friendship, love, and secrets and truths all combined to make it one good read!

On a dark and lonely night in 1854 two woman give birth to baby girls and are forced to give them up. One girl grows up in a life of privilege while the other grows up in poverty. Fast forward to 1873 and the girls, Josie and Kate, are grown and have been best friends from young girls and at Josie’s insistence Kate is even educated along with Josie. However the rules of different classes must be followed and Kate becomes a lady’s maid to Josie. Josie is highly spoiled and very used to getting her own way while Kate has always been the more easy going of the two.

Of course Josie is expected to marry someone of her own class and it becomes even more important when her father is gone. Without a good marriage she and her mother could be turned out of the family home with nothing. She sets her sights on Harry, a man of good breeding and money even though her heart really lies elsewhere. When it seems that Harry is more interested in Kate than Josie she becomes infuriated and this most certainly does not bring out her good side. She does and says some things that could possibly cause irreparable harm to her friendship with Kate. While out and about in town they come across an old gypsy woman in the square who has some things to say that rock their world. All that the girls had believed of themselves shatters into a million pieces and neither of their worlds will ever be the same.

The Lady’s Maid is an interesting novel in that it really showcases the differences in class at this time in history. You couldn’t marry outside of your class and whether you loved the person or not made no difference. As well servants and people of lower class always had to use the servants entrance and were sent there if they had the nerve to come to the main door instead. I think it’s interesting to note though that while we have come a long way there are still very distinct differences in class even today.

The Lady’s Maid was a great read for me and one I really enjoyed. I really liked the characters of Kate and Josie as well as a couple of the male characters who were awesome. There were even a few laughs brought about by the squabbles of Kate and Josie. I see that Dilly Court has quite a few books published and I plan on choosing a few more to curl up with especially on the cold winter nights to come.

The Lady’s Maid by Dilly Court is on tour with TLC Book Tours so be sure to pop in on the other tour stops to see what others thought of the book. You can check out more of Dilly’s work on her website as well as follow her on Twitter.  As well you can head over to Great British Reads which is an awesome site and there you can use the ‘open the book’ tool to take a peek inside The Lady’s Maid.   Your own copy of The Lady’s Maid can be purchased at Amazon and Amazon Canada.

Source: Review copy provided by the publisher.  No compensation was received for this review and all opinions are my own.