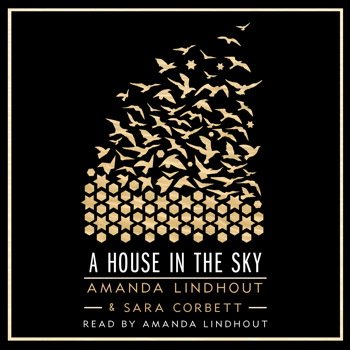 A House in the Sky by Amanda Lindhout and Sara Corbett is a deeply powerful memoir chronicling Amanda Lindhout’s fifteen months of captivity in Somalia in 2008. I listened to the audiobook of A House in the Sky which is narrated by Amanda herself. With Amanda telling of her experiences in captivity it made this book all the more emotional and powerful. At times I could hear the crack in her voice as she held back her emotions. I could not and cried a good many tears listening to her. Amanda’s courage and will to live should be an inspiration to everyone.

My initial interest in listening to this audiobook is that I live in the same province as Amanda – really not far from her home town. I remember this story clearly as it was on our news and I especially remember the news break when Amanda had been set free. When I saw that she had a memoir that told of this time in her life I knew I wanted to read it. I’m not sure I realized the effect it would have on me or how long her story would stay in my thoughts.

From a young age Amanda wanted to travel to faraway places to escape the daily struggles of living in an unstable environment. So in her twenties she makes the decision to save money and start her travels around the world. However Amanda isn’t interested in the touristy places. She backpacks through Latin America, Laos, Bangladesh, Sudan, Syria, and Pakistan. She then ventures to war torn Afghanistan and Iraq and begins to cultivates her career as a television reporter. After making it through all of these places unscathed she makes the decision to to travel to Somalia which was considered the most dangerous place on earth. She gets the necessary guides that instruct her on when it’s safe to travel but even that isn’t enough to keep her safe and in August of 2008 she is abducted, along with her friend Nigel, by a group of masked Somali teenagers.

Amanda’s time in captivity can only be described as hell. Most of us can’t even imagine going through what she did. She is tortured, starved, and kept in chains – she wonders if she will ever make it out of this dark void she is in. To survive Amanda converts to Islam but she also visits a place in her mind called ‘a house in the sky’. It is there that all is well. She pictures the family she loves and the future she wants and the hug she so desperately wants from her mom. It helps to keep her sane at a time when most minds would simply break.

After 460 days in captivity she finally gets that hug from her mom. Her resilience and courage amaze me. I’m certain I couldn’t survive a day let alone the fifteen months that Amanda endured. Her ability to survive those months is a true testament to not only her will to live but her courage in the face of great adversity.

I highly recommend this audiobook to anyone who reads memoirs and even those that don’t because it really reads like a novel. It is so powerful and evokes such emotion especially with Amanda reading it. I certainly wish Amanda all the best in the future and while I know she can never forget what happened to her I hope that with the love of family and friends she can at least find some healing and a future filled with things important to her.