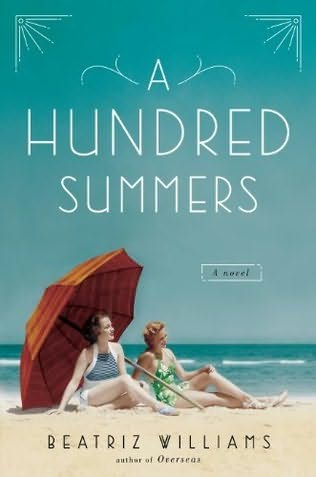 A Hundred Summers by Beatriz Williams was my bookclub’s choice for this month and I think it’s safe to say we all enjoyed it. Taking place in the early 1930’s in the oceanfront community of Seaview, Rhode Island, this is a story of love, betrayal, money, and old buried secrets – a recipe for disaster!

Lily and Budgie have been friends since they were kids. On a trip home from college with Budgie, Lily meets Nick and falls hopelessly for him and he for her. They plan to marry but everything seems set against them and things happen that only throw them apart.

Years later Lily is planning on spending a nice and relaxing summer in Seaview with her little sister Kiki. At first when she hears that Budgie and Nick are coming to spend the summer as well and that Budgie wants to renovate her old family home she is angry. And yes you read that right – it is Lily’s former best friend and former fiance that are now married. It isn’t long before Budgie manages to insinuate herself into Lily’s life again. It also isn’t long before Lily and Nick are drawn together again and when they are secrets begin to come to light that shock Lily to her core.

Oh my goodness, the webs that we weave. This novel is chock full of them. I really enjoyed it having listened to the audio which is narrated by Kathleen McInerney who does a fabulous job. I’ve listened to her a few other times and really enjoy her narration. She portrayed these characters perfectly making Budgie sound as bad as she really was and Lily meek and mild. Eleven and a half hours flew by between having a story that kept me enthralled and a narrator who did too. I recommend this one to anyone who enjoys women’s fiction. It was a great way to spend a few hours!