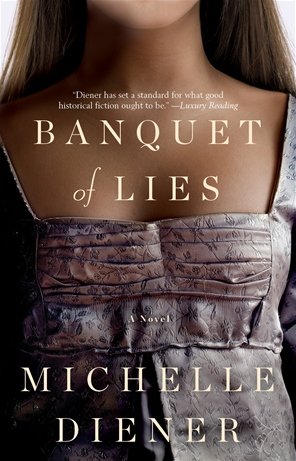 Oh let me count the ways in which I enjoy the writing of Michelle Diener. Her newest novel Banquet of Lies was fantastic! I expected no less though after reading The Emperor’s Conspiracy this past year and loving it as well. Michelle has a way of weaving a tale that takes place during a historic time with characters and a thriller type storyline that enthralls the reader.

The year is 1812 and Giselle Barrington up to this point has had a unique and interesting life traveling all over with her father. She knows he’s involved in some type of political secrecy but he’s always kept her in he dark with it telling her that she’s safer not knowing the specifics. This changes drastically when he’s killed and Gigi is left with his secret papers and ‘the shadow man’ now chasing after her to kill her as well. These are important political papers and if only Gigi knew who they needed to go to she’d be in much less of a fix.

She is in trouble though and she falls back on something she loves to do and that ‘s cooking.  She finds out through her loyal friend Georges that there is a position for a cook at the home of Lord Aldridge and even better it is only a few houses down from Giselle’s own family home.  It’s the perfect place for her to hide as no one would suspect a society lady of being a cook in someone’s home.  She’s hired as Madame Laveel by Edgars and once Lord Aldridge samples Gigi’s masterful cooking he is all but lost.  Once he sees her in person he is lost as she is quite beautiful and he just can’t keep away the nagging feeling that he’s seen her before.  Gigi remembers him from when she was a girl and she can’t help but notice how attractive he has become.  However she’s there to cook and to see if she can’t get some snooping time in over at her home a few doors down.  She’s quite sure the shadow man has followed her – she’s seen him lurking and following her.  Yet that isn’t her only problem as Edgars begins to suspect her of something and accuses her of being a spy.  He’s set on getting her fired and will do anything to achieve that goal.  Gigi is in a world of trouble and worse yet who can she  trust?

I really enjoyed Banquet of Lies and read it in one day.  It was one of those books I just didn’t want to put down and it was gloomy outside and the perfect day to curl up with a good book.  I loved the characters in this novel even the ones who played lesser roles like Georges who I adored because of how funny he was.  Even Charlotte Raven from The Emperor’s Conspiracy makes a few appearances and she was a favorite of mine from that novel.  Gigi is a very likable character.  Shes’ a strong, independent, and a very outspoken woman who can be quite wily when she wants to be.  I think a  novel with her teaming up with Charlotte would be fantastic!  I may even have fallen a bit for Lord Aldridge while reading this book as well.  Lol.

For fans of historical fiction Banquet of Lies is the perfect pick with all its action and suspense!  Packed with great characters and an intriguing storyline Banquet of Lies will be another favorite of mine from Michelle Diener.

I have one copy of Banquet of Lies by Michelle Diener to share with my US readers.  To enter…

This giveaway is open to US residents only (no PO boxes) and I will draw for the winner on November 12/13.  Good luck!

Source:  Review copy provided by the publisher via NetGalley.  No compensation was received for this review and all opinions are my own.