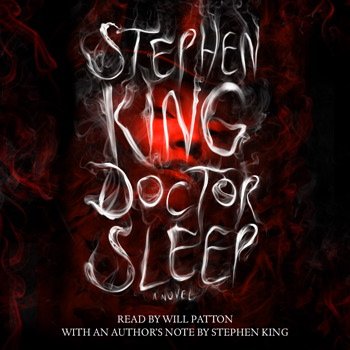 Wow! That is how I will start this review because that is the only word coming to mind as I just finished listening to the audio version of Doctor Sleep by Stephen King. It is narrated by Will Patton and I can’t even begin to gush over the great job I think he did. He was the perfect choice to narrate this book as he’s very talented with injecting the right amount of emotion and excitement into his voice at the right time. As for the book I will say that I didn’t think anything would live up to The Shining for me but I was wrong! I was glued to this audio from the beginning to the end and at 18 plus hours that says a lot. It was utterly fantastic!

Doctor Sleep has us returning to one of the most popular characters that Stephen King created and that was Dan Torrance of The Shining.  Dan is all grown up now but he is still haunted by the time he spent up at the Overlook Hotel when he was just a boy. It had affected most areas of his life with him turning to alcohol for solace from the depression and violent tendencies he feels.

After arriving in New Hampshire and meeting Billy and getting himself an AA sponsor Dan’s life begins to improve. When he begins working at a nursing home and using his ‘shining’ to help those pass peacefully in death he feels he’s finally found his calling and eventually they begin to call him Doctor Sleep. When he starts receiving messages on his blackboard from twelve year old Abra and learns she needs help he doesn’t hesitate. A crazy bunch of people who call themselves the True Knot go after those who have the shining and use the steam from it in order to keep on living and what they do to them I won’t even say. When they come after Abra though it becomes personal for Dan.  However he can never imagine how it will bring alive all his own demons that he’s been running from for years.

Doctor Sleep is awesome! It is Stephen King at his best and listening to it on audio made it all the better for me. It had my heart pounding and my mouth hanging open at some of the twists and turns and I loved every minute!

Source:  Review copy provided by the publisher.  No compensation was received and all opinions are my own.