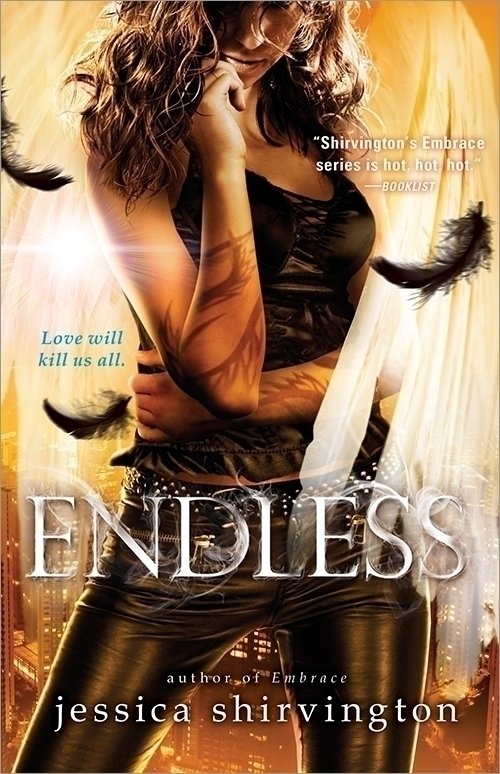 I adore the Embrace series!  Now that we’ve gotten that out of the way I have to say that the newest in the series, Endless, is by far the best yet!  There is action, love, loyalty, and the ongoing fight between good and evil all culminating in an ending that will have readers anxious for the next book in the series.  I was hooked from the very first book called Embrace and gobbled up Entice and Emblaze as soon as Sourcebooks released them as well.   This is one of the best series I’ve read with characters that you come to care about and a storyline that just doesn’t quit.

As Endless is the fourth book in the series I’m not going to say much about the plot other than to give an overall impression of the story itself.  Violet’s life has changed a lot since she first learned she was a Grigori – part human, part angel, and even more so in this latest book as the mother she believed dead has come back.  At first Violet isn’t sure how to feel about her mother since she believes that that her mother accepted a deal from her angel maker and left her motherless.  Even more troublesome is that with her mother’s arrival also comes the arrival of Lilith, an extremely evil exiled angel who is bent on destroying Violet.  This triggers the most violent war yet between good and evil.  Who will win?  More importantly who will survive to talk about it?

As always the relationship between Violet and Lincoln, her soul mate and partner, is a big draw.  The two love each other and yet are forbidden to be together except as partners and yet being together would strengthen the power they have.  I love the relationship they have and how they always look out for each other.  They are my favorite characters but the supporting characters in this series are just as awesome.  I like Violet because she’s strong and independent and believes so strongly in love and the good in people.  I found the relationship with her dad in this installment funny too as in the past he hasn’t bothered much with her life but decided this time around to take an interest just when she doesn’t want him too.  Needless to say that had me laughing a few times but there were parts of this novel that also had me shedding a tear or two… or three.

If you enjoy urban fantasy then I can’t say enough how much you should read this series.  Should you start with the first book – yes.  You need the back story and the development of the characters to really understand what is going on but I can guarantee that once you start the series you will want to keep going.  I actually listened to Endless which was narrated by Rebecca Macauley and she does an amazing job.  I love her accent and she uses a lot of emotion in portraying the story which really lends well to a person’s enjoyment of the book.

I loved Endless as I have the whole series and I am absolutely, without question, completely hooked.  Sadly I think there is only one more book to come entitled Empower out next year and I can’t wait!  There is also a television series in development which really excites me as I think this series would translate very well to television.  This is one series I recommend especially if you enjoy urban fantasy!

Source:  Audio from my personal library.  No compensation was received for this review and all opinions are my own.