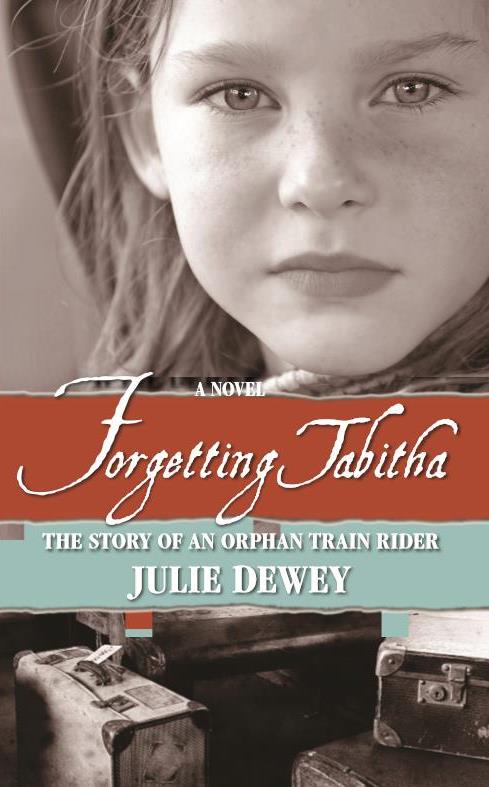 Forgetting Tabitha: The Story of an Orphan Train Rider by Julie Dewey is an emotional and realistically told story of the lives of children who boarded the orphan trains bound for new homes. I have read about orphan trains before but that didn’t make the impact of reading of them again any less horrific for me. The thought of all of these poor children without homes just broke my heart.

Tabitha starts out her life happy growing up on a farm with her mom and dad. That is, until her father dies. Tabitha and her mother move to the Five Points District in New York City. Needless to say this is no place for a young girl to grow up with the brothels, thieves, and more. Yet Tabitha is happy enough as long as she has her mom even though they struggle just to survive on a day to day basis. When her mother becomes ill and dies, Tabitha is left alone on the streets of New York stealing in order to have food to eat.

It is there on the streets that the Sister of Charity work to find the homeless and destitute children and send them off on orphan trains to hopefully find homes. This is where Tabitha ends up, alone and scared. She was instructed, as were the other children, to forget her past entirely- her name, religion, and family. They were given new identities and Tabitha became Mary. The trains stopped at various towns and the children were paraded like farm animals to be chosen by families – some looking for kids to love but more often than not looking for kids to work on their farms in exchange for room and board. As Tabitha is ten years old she isn’t the prime age for families to pick her but eventually she is chosen and that is where her story really begins.

The novel has several other characters other than Mary who I thought was brave, strong, and independent. She wanted a better life but never wanted to forget where she came from. My interest in the story was the orphan trains and the lives of the children afterwards. Not all these children end up in good living environments. The author writes this novel in a blunt and real way, much like I imagine the way life was at the time. Just a note that there are some graphic scenes which may bother some people. Ultimately Forgetting Tabitha is a story of courage and hope; one worth reading!

Forgetting Tabitha by Julie Dewey is on tour with Historical Fiction Virtual Book Tours so be sure to check out the other tour stops.  You can connect with Julie on her website and Facebook and you can purchase your own copy of Forgetting Tabitha at Amazon and Amazon Canada.

I have one copy of Forgetting Tabitha by Julie Dewey up for giveaway and best of all it’s open Internationally!  To enter…

This giveaway is open Internationally and I will draw for the winner on October 23/13.  Good luck!