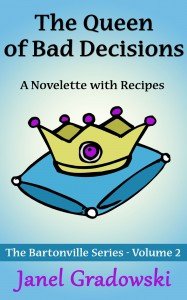 Today I’ve got Janel Gradowski, author of The Queen of Bad Decisions visiting the blog.  Some of you may remember Janel from her days blogging at Janel’s Jumble which is where I met her about five years ago.  Well now she spends her time writing and has published several books.  I reviewed her newest The Queen of Bad Decisions and Must Love Sandwiches – both from The Bartonville Series – yesterday (my review) and I enjoyed both books a great deal.  They are light, fun reads and perfect for those times when you don’t feel like reading something heavy and long.  Today Janel joins us with a guest post about her writing…

“It is never too late to be what you might have been.” George Eliot

That is my favorite quote. In fact, I have a print of it hanging on the wall above my desk. It is a little reminder to always follow my dreams because hopes and aspirations don’t have an expiration date.

I am a late bloomer in the fiction writing world. I was forty when my first flash fiction stories began appearing online in journals and contests. This wasn’t because I had recently decided that I wanted to be a writer. No, I decided I wanted to be a writer when I was in the fifth grade at the tender age of 10. In my teens and early 20’s I subscribed to writing magazines and I think I even entered a few writing contests, which I didn’t win. While I held down many jobs during that time, from renting apartments to college students to greeting shoppers in a grocery store, my favorite was writing press releases for the stock car race track that I also worked at. It was such a thrill to see words that I wrote in the newspaper. I was a published author, of sorts. There wasn’t a lot of creativity in listing race winners and my name wasn’t always included when the press release was published. Still, I enjoyed the work.

Then life got in the way. I got married, found a steady job working in the pre-press department at a newspaper, bought a house and had children. My old stories and ideas got stuffed into binders and buried among the clutter in the basement. After I had my second child I decided I wanted to make some inexpensive Christmas presents for friends and family, so I pulled out an also forgotten stash of beads. Soon I found that I had a knack for doing beadwork. It wasn’t long before I began designing my own patterns. Somewhere, in between the dirty diapers, mountains of laundry, seed beads and stacks of jotted down notes, I managed to read a book that talked about writing down dreams and goals as a way to help them manifest. So I scribbled “I want to be a published author” on a sheet of paper and tucked it away in between the pages of a notebook. Within a year I was regularly seeing my beadwork patterns published in major beadwork magazines. One of my designs was even the cover image for an issue.

What an exciting time that was. I loved stopping by the magazine area at Barnes & Noble when one of my patterns was published. It was like a delicious secret to look at a magazine and know my work was inside. Designing and publishing the beadwork patterns was exciting, but as time went on I realized I had still left behind my childhood dream. I wanted to write stories.

As my fortieth birthday approached I went into a creativity mid-life crisis. I decided to give writing fiction a hearty effort to see what would happen. I was getting too old to sit back and let my dreams just wither away. Much to my surprise, editors liked my work. I began accumulating publishing credits and then decided to compile some of my stories into ebooks.

I just released my fourth ebook, a novelette called “The Queen of Bad Decisions”. It is the second book in my Bartvonille Series of women’s fiction with recipes. The series is a form of serialized fiction, so stories will range from flash fiction to novella length, all revolving around the people who live in an artists’ colony.

While being a writer can be challenging it is also very rewarding. I get to live all kinds of interesting alternate lives through my characters. While I may not be a 20-something rising literary star I sure am happy I took Ms. Eliot’s advice to heart and found that it is never too late to become the author I have always wanted to be.

ABOUT THE QUEEN OF BAD DECISIONS ( from Amazon)

Daisy’s life is sliding downhill at breakneck speed. Leaving her worthless boyfriend lands her back at her parents’ home, sleeping on the couch. After only a few days she is tired and annoyed. Her parents give new meaning to the term “early riser” and she can’t avoid unpleasant encounters with her obnoxious brother. The only escape from the familial torture is at her job in a book store. Her boss finds a solution to the housing dilemma, but Daisy will need to change more than her address labels to make the arrangement work.

This book is a novelette that contains approximately 11,500 words. Two, short bonus stories along with recipes are also included. 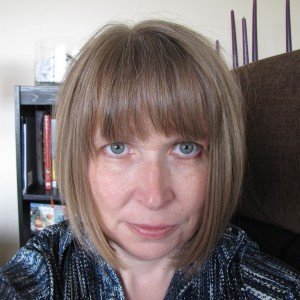 There are hundreds of fictional characters living in my mind. I love to let them out to play in my stories. I have written about everything from an insane ghost to a jealous wife with an explosive personality. Over the past few years many of my flash fiction and short stories have been published both online and in print. I have also been designing and publishing beadwork patterns for over 10 years. In 2012 I began publishing ebooks in my 6:1 Series. Each volume has six stories based on one theme. In 2013 I will begin publishing a culinary fiction series based in my home state of Michigan. While I love writing flash fiction, this new series will include novellas, novelettes and longer short stories as well as flash fiction pieces.

My favorite place to write is in my recliner, nestled into the corner of the living room. I can glance over my laptop screen and watch the wildlife perusing the field across the road. Everything from deer to turkeys and pheasants pass by as I wrestle the characters out of my head and onto the page. My almost constant companion and writing buddy is my beloved Golden Retriever, Cooper. He’s a great listener and always reminds to get up a stretch once in awhile, on the way to his treat jar. Besides my fur baby my family consists of two wonderful children and a fantastic husband.

I have an eBook copy of both The Queen of Bad Decisions and Must Love Sandwiches by Janel Gradowski up for grabs to one lucky winner. To enter…

This giveaway is open to anyone able to read an eBook and I will draw for the winner on November 20/13.  Good luck!

Source:  Giveaway copies to be provided by the author.