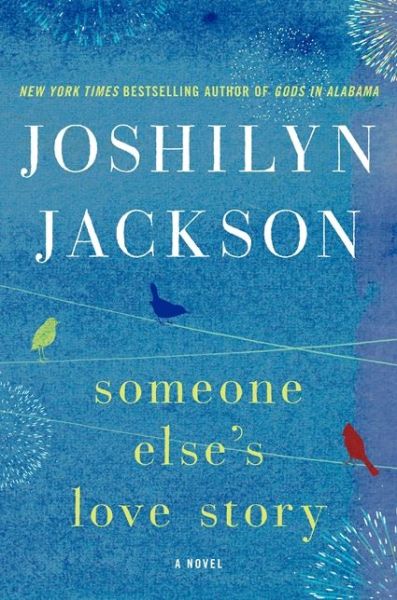 Someone Else’s Love Story by Joshilyn Jackson is the She Reads Book Club selection for November. This is my first book, well technically my second by Joshilyn Jackson as I listened to the prequel to this novel My Own Miraculous the other day and it was awesome especially with Jackson narrating it herself. What I will say is how crazy am I to have waited this long to read the work of this amazing writer! Someone Else’s Love Story is a mix of love, destiny, and of learning who you are and what you ultimately want from life.

Shandi makes the decision to move to her father’s condo in Atlanta and finish up college and her father has promised the best schools for her son Nathan – nicknamed Natty. Natty is three years old and he’s a genius. She’s excited at the prospect of a new future until, on the way there, she and Natty find themselves in a store during a robbery. Also in the store is one of the most amazing men Shandi has ever seen who ends up getting shot in the process of trying to protect everyone. Shandi is already imagining a future with William and when he’s laid out on the floor and whispers destiny to her she’s hooked…but did this destiny involve her or someone else?

The one thing the robbery did for Shandi was make her realize that she had to stop being weak and face her own life head on. She still has so many questions about the night Natty was conceived. She tries to take charge of William’s care but his best friend Paula keeps shoving her away, telling her that William could never love her. On the flip side her best friend Walcott has started to act strange. They have been best friends for forever and it’s not like him to be so angry and discouraging of her friendship with William. As we all know though things are never as they seem and that most certainly fits for all these characters. There are a number of things going on in the background of everyone’s lives and it’s just a matter of time before it all explodes in one big emotional heap.

There were a few characters in this novel that I absolutely adored with the first being Natty. Hearing his little three year old self say adult things was the cutest thing and I just felt this need to protect this little guy myself. The men in this novel, both Walcott and William, were awesome. Walcott is the poetry spouting type while William is the big strong man, yet each is attractive in his own way. I liked Shandi but she grated on my nerves a bit although I very much admired that even at a young age she protected her son with everything she had. Then there was Paula, Williams’s best friend who just made me laugh.

Someone Else’s Love Story is full of great characters and a story that really made me think about love stories. It doesn’t have to be a man/woman type of love. There are many others … parent/child, furbabies/parents, the relationship we may have with God and likely many more. It also makes us think about whether love is just destiny or does it all boil down to some scientific explanation? For me, I don’t think so. I still like to believe in destiny and miracles. Someone Else’s Love Story is a great pick for book clubs and for anyone else looking for a charming, heart felt story that has some unexpected twists in it!

Check out other thoughts on the book over at She Reads