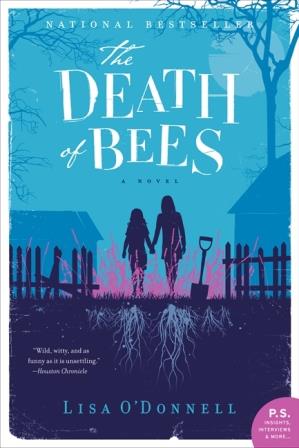 “Today is Christmas Eve. Today is my birthday. Today I am fifteen. Today I buried my parents in the backyard. Neither of them were beloved. “

Marnie and Nelly come from one of the most dysfunctional families I’ve ever read about. Their mom Izzy was a drunk and neglected her girls and their father Gene was a druggie and an awful person. The girls are much better off without the both of them but now there is the problem of staying under the radar so that they aren’t put into foster care. Neither of them wants that. They want to stay together. Burying their parents in the backyard was their only solution. Until their neighbor Lennie begins to get suspicious.

Now Lennie has his own bad reputation in the neighborhood to deal with. He is a gay man but that’s not the issue. The issue is he was caught doing something he shouldn’t have been doing. I was prepared to fully despise this man and yet I couldn’t. He took the girls under his wing and cared for them the best he could. Then there is Vlado who is another man wanting to help them but he’s a drug dealer. Eventually, despite their best efforts to keep everything secret, all the lies come out and they end up at their Gramps house. There are reasons the girl’s mother was how she was and the girls may be in even more danger at his house than anywhere else.

I guess I’m in the middle with this book. The beginning threw me off some but by the middle I found I couldn’t put it down and needed to know how everything would turn out. It is a very dark story which in itself doesn’t bother me nor does the bad language throughout. Maybe it was because I didn’t feel a connection with the girls although I really liked Nelly. She is considered slow and yet for all her slowness she seemed to be the more level headed of the girls and she could be quite amusing amid the darker side of this novel. Ultimately this book held my interest. It is gritty, raw, and real and yet shows the resilience and hope of the human spirit.