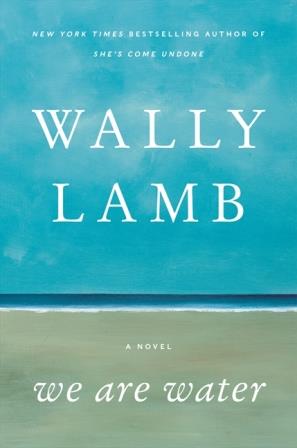 We Are Water is Wally Lamb’s latest masterpiece. I’ve read several of his novels and this one is no different tackling issues that others may not. He writes in such a way that he sucks the reader into the world he’s built and whether good or bad you can’t stop reading. We Are Water is no exception. It is an excellent novel and the audiobook version is amazing. In We Are Water, Wally Lamb has woven a complicated and intricate tale of an American family and the tragedies of the secrets they keep.

Orion Oh, a psychologist, thinks that life is going along quite smoothly until his wife of twenty-seven years tells him she’s leaving him and marrying a woman. Neither he nor their three children, Ariana and her twin Andrew and Marissa, understand what is going on with Anna and Andrew especially does not approve of her relationship with Viveca. To top it off Anna wants to be married in their hometown of Three Rivers in Connecticut. Even though Orion is angry about the whole situation he still loves Anna and wants the best for her.

The wedding and breakup up of their family unearths a lot of emotions for the Oh family. With the book being told from various perspectives we get to see both the past and present of the characters. We see that Anna has suffered great tragedy as a youngster and that it has manifested itself in different ways as an adult. The secrets she has kept – dark, disturbing, and painful – have had a rippling effect on her own family. Consequently her marriage and her children have also suffered. We learn that Orion’s father was not a presence in his life and how it has affected him as well as his anger at himself for not always seeing what was happening in his own home. We see how the children have coped as kids with a sometimes unstable environment and as adults with their mother leaving her marriage for a woman.

This novel explores many issues and some make it difficult to continue reading. Yet these issues make up the reasons for the dysfunction that is surrounding this family. There are other issues tackled as well like gay marriage and homophobia, racial issues, and abuse of children. Again some of these are extremely hard to read about but they tie into the telling of this novel in a huge way. While there are difficult themes in this novel there is also forgiveness, hope, and a love that is enduring through the good times and bad.

I listened to the audiobook of We Are Water which is narrated by some pretty awesome narrators including Wally Lamb who is the voice of Orion and he is a great narrator and perfect for that character. Along with Wally Lamb the other narrators include George Guidall, Maggie-Meg Reed, Tavia Gilbert, Richard Ferrone, Edoardo Ballerini, Cynthia Darlow, and Therese Plummer. This audiobook comes alive in your mind like a movie production and for me it was so well done!  We Are Water comes highly recommended!

Source: Audiobook from my own personal library.