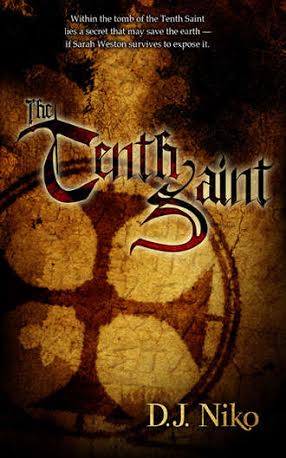 The Tenth Saint by D.J. Niko will take you on an adventure and will surely have you turning the pages quickly as it did me.  The Tenth Saint is the first in the Sarah Weston Chronicles and I’ve actually done things a little backwards this time as I read the second in the series before this one but it made no difference.  The Tenth Saint had me enthralled from the first pages to the last and I have to say that this series has me hooked.  I love the characters and the fast paced story line with plenty of action!

The Tenth Saint finds archaeologist Sarah Weston in Ethiopia where she discovers an ancient tomb with unusual inscriptions on it.  The tomb is said to belong to the tenth saint of Coptic Christianity and as Sarah delves into the case she finds that the remains of this rumored saint are odd and seemingly impossible as he is found to have fillings in his teeth that are unlike anything ever seen before leaving Sarah mystified.  Sarah, along with Daniel Madigan who is anthropologist, set out to decipher these inscriptions and what they ultimately learn has the power to terrify them.  They tell of the eventual destruction of the earth and man’s role in causing it to happen. As with any discovery Sarah wants to share it but quickly learns that there are some very powerful people that do not want to see these inscriptions come to light and they do will anything to make sure that they don’t.  Soon enough Sarah and Daniel are putting their lives in danger and they can only hope to make it out alive.

I really like both Sarah and Daniel.  Sarah is a very strong female character.  She comes from privilege but has chosen to not live her life that way much to her father’s chagrin.  I love that she falls head first into any situation, dangerous or not, in order to do what she believes is right.  Daniel just seems to be a really great guy and together he and Sarah make a great team.  Between the two of them they always manage to find trouble and then have to risk life and limb to get themselves out of it.

On another note I love D.J. Niko’s novels for the historical elements.  I find it fascinating to learn all the information she includes on religion and ancient artifacts or writings.  You can definitely tell that she loves what she writes about and meticulously researches all elements to bring them together in a fictional story that has you on the edge of your seat as it unfolds.  I wouldn’t hesitate to recommend The Tenth Saint or the Sarah Weston Chronicles to readers who enjoy historical fiction with a little mystery and adventure added in!

I have one paperback copy of The Tenth Saint by D.J. Niko up for giveaway.  To enter…

This giveaway is open to US/UK, and Canadian residents (no PO boxes) and I will draw for the winner on December 19/13.  Good luck!

Source:  My own personal copy.  Giveaway copy provided by the publisher.  No compensation was received for this review and all opinions are my own.