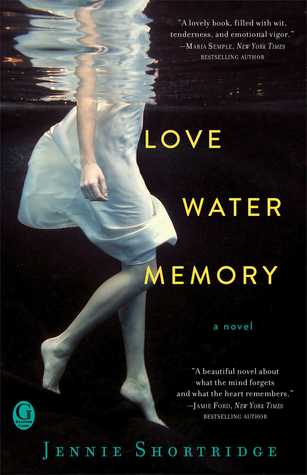 Love Water Memory by Jennie Shortridge is the She Reads book club selection for January. As I was trying to get Sam’s health stabilized I’m late with the review but better late than never I say especially when you really enjoyed the book. I listened to the audiobook of Love Water Memory which was narrated by Angela Dawe. I haven’t listened to anything by her before and I really enjoyed the way she portrayed the book. She changed up her voice and added emotion which is what I look for – a narrator who grabs my attention and sinks me into the story she’s telling.

Just who is Lucie Walker? Well even Lucie Walker doesn’t know anymore. When she sees the world again she is knee deep in the frigid water of the San Francisco Bay. She’s taken to the mental health ward at the hospital since she can’t remember anything and nobody is more shocked than she is when she hears that she has a fiance and a whole life beyond this memory loss.

When she first meets Grady, her fiance she can’t help but notice how handsome he is and it’s clear that he knows her. Still when they go home to Seattle she is really out of sorts. Not much seems familiar but when she starts going through her things she becomes increasingly curious about her past. When she finds out that she has an elderly aunt who she apparently hated she wants nothing more than to get some answers to all the questions she has swimming in her head about her past. Is her aunt the key to all these swirling thoughts?

Even more disturbing than the memory loss is the very clear picture of who she used to be becoming more apparent. She was not a nice person and it seems she pushed everyone away with her standoffish manner. The neighbours don’t seem to friendly towards her and it doesn’t seem as though she has any friends either. Who was Lucie and why was she so guarded against everything? For Grady it’s a struggle trying to sort out this easy going Lucie for the controlling one he had before. He has no clue how to properly handle the situation and he is terrified to tell Lucie just why she was running away from everything in the first place. One has to wonder though if a new start isn’t exactly what they need to fall in love all over again.

I really enjoyed this book especially the audio version. I recommend it to anyone who enjoys women’s fiction. Please be sure to pop by and check out what the other great bloggers at She Reads thought of the book!

Source:  Audiobook from my own personal library.