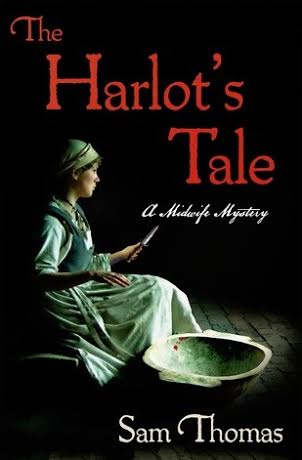 The Harlot’s Tale is the second in the Midwife Mysteries series written by Sam Thomas. The first was The Midwife’s Tale which I thoroughly enjoyed. Needless to say I was looking forward to reading this one and will as soon as I get back to my reading. My apologies to the author for not having a review ready but as most who read my blog know my pup Sammy is sick and I’ve been focusing all my energies on him for now. As a side note he is still eating, not as much as before, but eating and playing a bit. For that I am grateful.

In the meantime though, check over at Historical Fiction Virtual Book Tours for the other tour stops on Sam Thomas’s tour for other reviews, interviews, guest posts, and giveaways. For how I’m going to share with you what the book is about, a bit about the author, and a giveaway at the end of the post. I can speak from the experience of reading Sam’s first book that he is a fabulous writer and is able to draw you fully into the story he writes and keep you there. If you enjoy historical fiction his books are a must!

It is August, 1645, one year since York fell into Puritan hands. As the city suffers through a brutal summer heat, Bridget Hodgson and Martha Hawkins are drawn into a murder investigation more frightening than their last. In order to appease God’s wrath—and end the heat-wave—the city’s overlords have launched a brutal campaign to whip the city’s sinners into godliness. But for someone in York, whipping is not enough. First a prostitute and her client are found stabbed to death, then a pair of adulterers are beaten and strangled. York’s sinners have been targeted for execution.

Bridget and Martha—assisted once again by Will, Bridget’s good-hearted nephew—race to find the killer even as he adds more bodies to his tally. The list of suspects is long: Hezekiah Ward, a fire and brimstone preacher new to York; Ward’s son, Praise-God, whose intensity mirrors his father’s; John Stubb, one of Ward’s fanatic followers, whose taste for blood may not have been sated by his time in Parliament’s armies. Or could the killer be closer to home? Will’s brother Joseph is no stranger to death, and he shares the Wards’ dreams of driving sin from the city.

To find the killer, Bridget, Martha, and Will must uncover the city’s most secret sins, and hope against hope that the killer does not turn his attention in their direction. 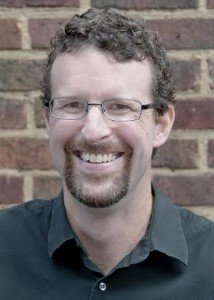 Sam Thomas is an assistant professor of history at the University of Alabama in Huntsville. He has received research grants from the National Endowment for the Humanities, the Newberry Library, and the British Academy. He has published articles on topics ranging from early modern Britain to colonial Africa. Thomas lives in Alabama with his wife and two children.

I have one paperback copy of The Harlot’s Tale by Sam Thomas to share with my readers. To enter…

This giveaway is open to US and Canadian residents (no PO boxes) and I will draw for the winner on February 4/14.  Good luck!