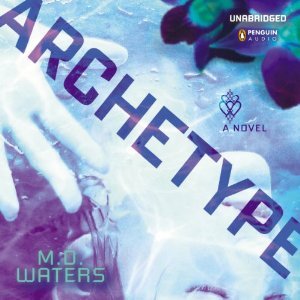 Archetype by M.D. Waters kept me on my toes from the opening of the novel right through to the conclusion. Archetype is a futuristic and suspenseful tale that is built around a world I found very intriguing. I was lucky enough to listen to the audio version and it is very well done. It is narrated by Khristine Hvam who I’ve never listened to before but wouldn’t hesitate to again. She narrated this novel throughout with different emotions and tones that blended perfectly with the story being told.

When Emma wakes up she is in a hospital and has no memory of anything that came before the moment she awakens. She had an accident so her loving husband Declan tells her although she can’t remember it. Declan keeps telling her she’s fine and she has no choice but to believe him. By day she is going through tests and relearning all that she’s forgotten but it’s the nightmares at night that have her questioning everything around her. Her nightmares involve fighting wars and always running but perhaps the most troubling aspect is the man in them – the man she feels she knows and knows well. Along with the voice in her head that is constantly guiding her and these dreams she begins to realize someone is lying to her and there is something much bigger going on than she could ever imagine.

Well folks that’s all I’m going to say because to say more would spoil this book for any who will read it. I will say that there is quite the story going on. I really enjoyed this book, especially on audio, with its twists and turns and it was great to see the story unfold to its conclusion. Luckily for me there is a second book coming in July entitled Prototype and I can’t wait to get it. I’m hoping for an audio version again as this one was so well done! It’s one of those books that’s hard to put down or in this case hard to quit listening to and I love those kind!

For those who enjoy futuristic novels this is a great debut novel from M.D. Waters!