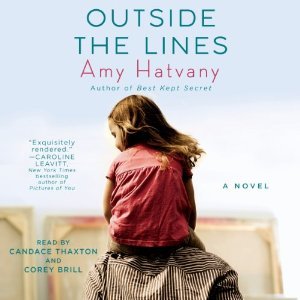 Everyone prepare yourself while I gush about Outside the Lines by Amy Hatvany because I really loved this book! I have read another of Amy’s books and what I love most about her writing is that she writes straight from the heart. You can feel it in the emotions and feelings of her characters; of how close you find yourself intertwined in their stories. I listened to the audio version of Outside the Lines which is narrated by Candace Thaxton who I adore and Corey Brill. Between the two of them they bring the emotional tone of this novel alive to the reader and I can’t imagine experiencing this book any other way.

Thirty year old Eden runs a successful catering company hoping to one day open her own restaurant. The one thing missing in her life other than a relationship that works for her is her father. When she was ten years old she found him bleeding on the bathroom floor after a suicide attempt. It is something that she could never forget and she never got any reassurance from him because he disappears soon after.

Now twenty years later she has met Jack and she thinks he may just be the one for her. He runs a homeless shelter and she begins volunteering her cooking services once a week in the hopes of maybe connecting with someone who knew her father. Eden still longs to know if her father is okay and when she learns that her mother has been hiding something from her for years she is even more determined to find him. The big question is – does he want to be found? It turns out to be a journey for Eden – a journey of acceptance and love.

Outside the Lines is the perfect title for this book as it brings to light mental illness. It shows us how it affects families and especially the children who quite often feel that if their parent just loved them enough they would take their meds and be better. It isn’t that easy though. Many people suffering from a mental illness are simply unable to conform to the society we live in every day and they find ways to cope with it on their own whether it be alcohol or drugs. Sometimes they just don’t want to be found. For Eden she finally realized she needed to love her father for who he was not who she wanted him to be and that he had been the best father he knew how to be.

Excellent novel – especially the audio version. Read it or listen to it. Be prepared for some tears though. Highly recommended!