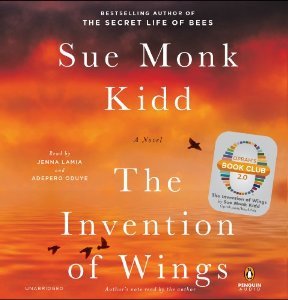 To say that Sue Monk Kidd is an amazing writer is an understatement. I first fell in love with her writing when I read The Secret Life of Bees and have anxiously awaited another novel by her. Well it’s here and it’s called The Invention of Wings and it is amazing! It is also an Oprah Book Club selection and I know that this is one book that will make great book club discussions.

The Invention of Wings takes us into the Deep South in the nineteenth century when slavery was rampant and women had little rights. On a plantation in Charleston young Sarah knew she wanted more for her life and knew even at that young age that slavery should not exist. When, at eleven, she’s given ownership of young Hetty ‘Handful’, she’s more horrified than anything else and even attempts to free her. Of course she doesn’t get away with it so the girls begin to forge a friendship that will last their lives even as they both follow their own separate paths. The issue of slavery is always a hard one for me to read about as I just can’t fathom the cruelty of people. I have so much respect for those in the early days who stood up against slavery even at their own risk.

Inspired by the historical figure of Sarah Grimke the author tells a story of what their lives may have been like while weaving in historical fact. Sarah becomes becomes one of the early pioneers in the abolition and women’s rights movements along with her sister Angelina. Over the years Sarah’s life is at risk many times but still she stands up for what she believes in. I believe she would have been a great woman and it would have been an honor to know her. I loved the story of Hetty as well. Although tied to a life of slavery she still had the will and determination to know that what she wanted most for her life was freedom.

I had the pleasure of listening to The Invention of Wings on audio and it is fantastic. It is narrated by the hugely talented Jenna Lamia who I love to to listen to and Adepero Oduye who I haven’t listened to before but thought she did a wonderful job with the character of Handful. The audio is almost 14 hours long and I dreaded it coming to the end. I was completely captivated by the way these two women portrayed this story! The audio also has an author’s note read by Sue Monk Kidd herself and it is not be missed. She talks of her writing of the book and the characters and it provides a wealth of extra information along with the author’s feelings on the novel as well.  Very powerful!

I don’t believe I can possibly do this book justice. It is a book I loved and I know I won’t forget the characters of Sarah or Hetty or their story any time soon. This book truly touched my heart. The Invention of Wings is the perfect blend of historical fact and fiction culminating in a beautiful novel of hope and courage. Highly recommended!