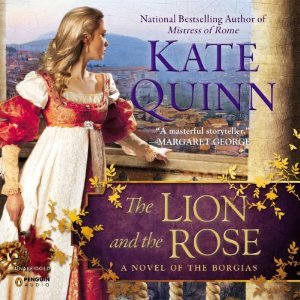 Kate Quinn scores another 5 star read for me with her latest novel in her series about the Borgias entitled The Lion and the Rose. The Lion and the Rose is the second in the series with the first being The Serpent and the Pearl which I also loved. Once again I listened to the audio version and it is beyond awesome! It is narrated by Maria Elena Infantino, Leila Birch, and Ronan Vibert and they do such an incredible job. I swear it’s like watching a movie in my head as they pull me further and further into the turmoil of the Borgia world.

As this is the second book I don’t want to say much so I’ll just do a brief overview and talk more about the characters. The Lion and the Rose brings back my favorite characters of Guilia, Carmelina, and Leonello with the addition of a new favorite and that is Carmelina’s apprentice Bartholomew who was much more in the picture this time around. These three are drawn into the Borgia world full tilt at a time when the Borgias had complete control and power over Rome. Swirling all around them are murders, deceit, betrayals, and more wrong doing than ever. Yet amid the evilness love and romance blossom.

I got so involved in this audio and it’s a long one at 18 hours but honestly I never noticed the length because I was too enthralled in the story. Giulia is one of my favorite characters. Sure she’s the whore of the Pope but she’s a strong and sassy woman who cares deeply about the people closest to her and even those who aren’t. Living in a time when women didn’t have any rights she made the best of what she had and that was her beauty. She inspired fierce loyalty in her dwarf bodyguard Leonello who I adored. And then of course there was the cook Carmelina and every time she mentioned all the delectable foods she was cooking up in her kitchen my mouth would water. I am most surely going to miss these people!

Kate Quinn has long been a favorite author of mine. I look forward to each new novel she writes and I have yet to read one I don’t like. Now that I’ve discovered how wonderful her books are in audio though I don’t know if I’d read them in print again unless I have too. Her novels translate really well in an audio production. If you enjoy historical fiction then I urge you to try a novel by Kate Quinn. You won’t be disappointed!