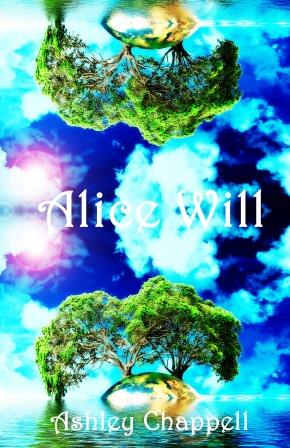 Alice Will by Ashley Chappell is a Young Adult fantasy novel that was a fantastic read! I really enjoy books that are full of magic, demons, and goddesses and Alice Will delivered on all counts along with a fourteen year old heroine who can definitely kick some butt when she needs to! I was drawn into this book from the start with the world building, characters, and vivid imagery that made me feel as though I was a part of the book itself. One thing for sure – Ashley Chappell has quite the imagination!

We have fourteen year old Trotter who is a demi- goddess with Prowler, the talking cat (which I loved). We also have almost seven year old Alice who is just a lonely little girl working as a servant. Yet there is something about Alice… Now Trotter knows she has magical abilities. The only problem as she sees it is that she can’t manage to get her magic to work properly and more often than not causes herself more problems by using it. However when the world as she knows it begins to crumble she learns that it is she who is to save it. Really??? She doesn’t think so. She can’t even get her magic to work! Yet as she begins her adventure she also begins to learn just how powerful she actually is and just how Alice has been changing the world around herself.

I don’t want to give away any of this story because that would just ruin a good adventure for someone else. I do want to say how fresh and fun this book was though. Trotter is a great character and she had me laughing more than once and Prowler her cat is just a hoot! Yet there is also a deeper element of emotion in this book that shows the value of believing in yourself and in what is right and good. There are twists and turns, scary monsters, and secrets unfolded that are sure to hold any reader captive.

I’d say this book falls between middle grade and young adult as both could enjoy it. And as you all know I’m neither at my age and I thought it was a great story. I’m excited as I’m going to be reviewing the second in the series called Tilt next week. I can’t wait to get back to Trotter’s world and see what she’s up to next! Recommended for young and old readers especially those who love a good old fashioned fantasy novel that is really well written and exciting!