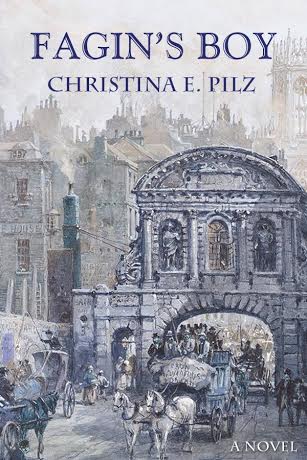 Let me start by saying that I have always had a soft spot for Oliver Twist, the young orphan boy who only wanted a better life. I’ve read the book by Charles Dickens and watched the movies so when I heard about Christina E. Pilz’s novel Fagin’s Boy I knew I just had to read it! Fagin’s Boy gives us a glimpse into what Oliver Twist’s life may have been like after he grew up and most surprising is she takes his life in a direction I didn’t expect. Fagin’s Boy, like Oliver Twist before it, will capture your heart!

Oliver is seventeen years old and it’s been five years since his time in Fagin’s gang. Gone is the young orphan boy with no hope for his future other than thieving. Under Mr. Brownlow’s care Oliver is a fine young man of good breeding but when Mr. Brownlow passes on Oliver’s future is suddenly in question. Up until now Oliver has been leading a pretty easy life but now he will have to find a job and make his own way in life. With the help of a few of Mr. Brownlow’s friends Oliver gets a position in a well known haberdashery.

At first his new position and home seems to be really good. After all he’s got a roof over his head, money in his pocket, and good food to eat every day. Soon enough though a big problem arises in the form of Jack, also known as the Artful Dodger to Fagin’s gang. He shows up in Oliver’s life and no matter how many times Oliver tells him to leave him alone he just won’t go away and this is putting Oliver’s position and his dreams of one day owning his own bookshop in serious jeopardy. Yet at the same time Oliver can’t help but feel the pull of Jack and his memories of the past.

It isn’t until Oliver’s employer decides to get an orphan boy to work in the shop that Oliver truly begins to question everything. In this orphan boy Oliver sees everything he once was and it drives him crazy. These workhouse boys are never treated well, not fed well, and really overworked. Oliver knows this is wrong and eventually is own emotions cause him to lash out at the boy furthering Oliver’s downward spiral. Things come to a head when Oliver’s employer does something that Oliver simply can’t look away from and Oliver reacts. His life is never the same after that and he has no choice but to seek out Jack and his old life once again.

I found Fagin’s Boy to be a really interesting take on what may have happened to Oliver Twist after his happy ending. In Fagin’s Boy we see a darker side to his story. He is so haunted by his past especially with the return of Jack when all he really wants to do is avoid it. Can we ever really escape our past though? Doesn’t it always come back to haunt us in one way or another? Fagin’s Boy is a beautifully written tale with vivid descriptions of life on the streets of London making you feel as though you are right there alongside Oliver! Well worth reading especially if you’re a fan of Oliver Twist but also stands on its own quite well!

I have one paperback copy of Fagin’s Boy by Christina E. Pilz to share with my readers.  To enter…

This giveaway is open to US and Canadian residents only (no PO boxes) and I will draw for the winner on March 29/14.  Good luck!

Source:  Digital review copy provided by the publisher.  No compensation was received for this review and all opinions are my own.