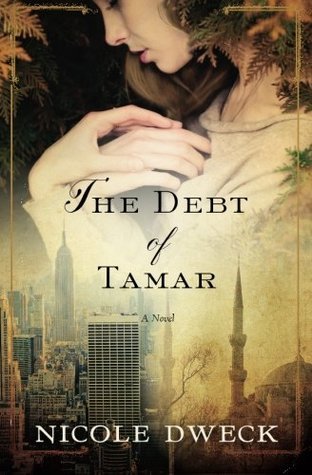 One of the main reasons I wanted to read The Debt of Tamar by Nicole Dweck for her book tour with Historical Fiction Virtual Book Tours other than it sounded fantastic was that Amy from Passages to the Past had loved it. Fact is I really trust her opinion and was she ever right – this novel was such a great read for me! I was hooked from the opening chapter right up to turning that last page and I enjoyed every minute. The Debt of Tamar is a beautifully written novel of love, loss, and fate through the generations.

Dona Antonia Nissim spent years trying to protect her family while helping other Jewish people to safety by using her position in society. One day though it all comes crashing down and she’s arrested under suspicion of being a secret Jew. Her children Jose and Reyna are left alone but soon learn that Dona Antonia had previously arranged for their escape to Istanbul.

In Istanbul they finally meet the all important Sultan who had helped them in their escape. Here the Jewish people are accepted and soon Jose and Reyna marry and have a daughter, Tamar. For years things go well with Jose working his way up the ranks with the Sultan and his family is happy. Tamar and the Sultan’s son grow up together and eventually fall in love. With family secrets looming in the background one day Tamar just vanishes into thin air. Murat is devastated and refuses to accept that she’s gone. He never does.

Centuries later we meet Selim Osman, a descendant of Murat. Selim wonders if he’ll ever find love and feels as though he’s always lived his life waiting for something or someone. When he’s diagnosed with an aggressive cancer he decides to leave everything behind including a woman who loves him. Checking himself into a hospital he eventually meets Hannah. As they get to know each other both feel strong ties to the past. A past in which they had known and loved each other. Is it fate that the two meet so many generations later…

I have barely scratched the surface of this wonderful debut novel from Nicole Dweck. I loved seeing the story unfold and how everyone’s stories became one in the end. Highly recommended!

I have one paperback copy of The Debt of Tamar by Nicole Dweck to share with my US readers.  To enter…

This giveaway is open to US residents only (no PO boxes)  and I will draw for the winner on March 29/14.  Good luck!

Source:  Digital review copy provided by the publisher.  No compensation was received for this review and all opinions are my own.