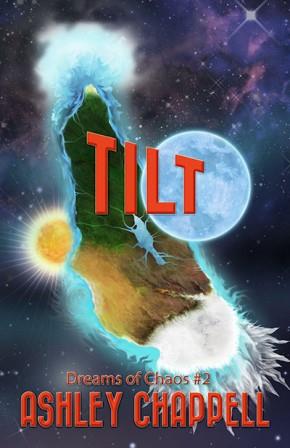 Tilt by Ashley Chappell is the second book in the Dreams of Chaos series and it was just as good as the first book, Alice Will, but takes the story to a deeper level. Once again Ashley builds up this fantasy world with goddesses, monsters, trolls, talking cats, brew witches and tickle witches. I am amazed by the imagination that Ashley has and how vividly she portrays her story. As the action builds with each page turned you can’t help but be enthralled!

Two years have passed since Trotter learned that she was a goddess and saved her world from destruction. You’d think that would earn her recognition not punishment and yet because she refuses to honor those in the Accord and their rules she ends up banished to Aevum instead. The worst part of the banishment is she allowed no contact with her parents who remain in the Realm after just having finally gotten to be with both of them. Needless to say Trotter is angry! Life in Aevum is lonely and quiet until one day … it isn’t. All of a sudden Aevum starts to tilt and is plunged into darkness throwing its people into chaos. As Trotter battles to save the two worlds she is thrown into a new world that will force her to finally realize just who and what she is.

Tilt definitely takes us on a whirlwind journey of non stop action. Once again I really liked Trotter because she is strong and determined to do what is best for those she cares about. And we can’t forget about Prowler, the talking cat. This story finds him in an amusing situation that had me laughing – it’s just too funny seeing cats who seem more human than pet … then again Prowler was once human. We are introduced to quite a few new characters in Tilt but I did miss Trotter’s parents in this one. I hope to see more of them in the next book but it was fun to meet new and interesting characters with their various magical talents.

I found Tilt to be on a much more mature level than Alice Will was and once again very well written. It is still a young adult book but I’d peg this one for the older set. I enjoyed seeing Trotter learn more about herself in this book and I’m curious to see where the third book will take her so needless to say I’m a bit anxious to read it! If you enjoy imaginative writing, fast paced action, and magic and monsters then give the Dreams of Chaos series a try – it’s fun, exciting, and addictive!