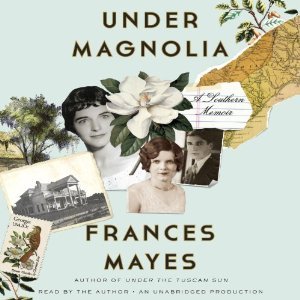 Under Magnolia: A Southern Memoir is Frances Mayes latest book and it shows a much different Frances Mayes than most of her readers are likely used to. In this memoir she takes us back to her roots and to the struggles and triumphs that made her who she is today. I listened to the audio book which is narrated by Frances Mayes herself and I thought she did a wonderful job. To me a memoir is made all the more powerful when the author reads it themselves.

Frances didn’t have a rosy childhood with a father who was quite ill and a mother who struggled with depression and alcoholism. From a young age she wondered why her family wasn’t like others and why they couldn’t be happy. I think it’s a testament to her that she became the amazing writer she is today. To overcome adversity and rise above it is always an inspiration to others. As a young woman she was basically told she needed a husband because that’s just how things were done and yet she wanted more for herself.

I found too that the dynamic between mother and daughter was interesting. Despite the struggles with her mother Frances always make it clear that nobody is perfect and her mother had good and bad points. Truthfully we all do. While her mother left her with bad feelings she also left her with good ones. In all of it she realizes that her mother never got to have the life she may have wanted and it resulted in her alcoholism and depression. One of things that Frances said that stuck in my mind was that her mother’s life had blossomed into hers meaning that while her mother may not have gotten to see her dreams realized Frances was going to do it for her. It was just so profound to me to be so forgiving and accepting.

This memoir is so different from her memoirs about Tuscany which I loved. Under Magnolia is all about Frances’ memories and she spins them quickly. It’s like a moving portrait of her past as she remembers and it’s very vivid and beautifully told; really very poetic.  This memoir highlights Frances Mayes talents as a writer like no other!

If you’re a fan of Frances Mayes and curious about her life then this memoir is one you’d like. I think those from the South will enjoy it even more as they can connect with the things she refers to and talks about. I’ve long been a fan of Frances Mayes work and her memoir left me feeling enriched for having listened to it especially with her telling her own story. Very moving!

I have one copy of Under Magnolia:  A Southern Memoir by Frances Mayes to share with my US readers.  To enter…

This giveaway is open to US residents only (no PO boxes) and I will draw for the winner on April 12/14.  Good luck!

Source: Review copy provided by the publisher.  No compensation was received for this review and all opinions are my own.