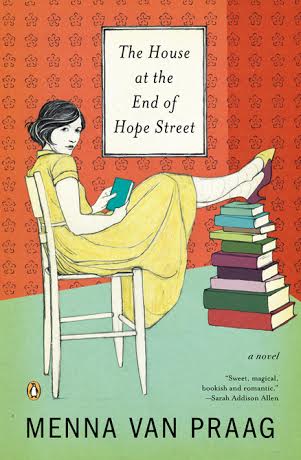 The paperback edition of The House on the End of Hope Street by Menna van Praag released on March 25th!  To celebrate its release I’m going to tell you a bit about the book and then offer you a chance to win a copy for yourself.  I have the audiobook version of this book and have been anxious to get to it for ages since I’ve seen so many great reviews for it. I’ve read that The House on the End of Hope Street will appeal to fans of Sarah Addison Allen  and I love her books so I can only imagine I will love this one too.  Keep an eye out – there will be a review one day soon!

The House on the End of Hope Street

What would you do if you had ninety-nine days to change your life? When you enter the world of Menna van Praag’s magical debut, THE HOUSE AT THE END OF HOPE STREET about an enchanted house that offers refuge to women in their time of need, that is precisely what you’ll begin to ask yourself.

When Alba Ashby, the youngest Ph.D. student at Cambridge University, suffers the Worst Event of Her Life, she finds herself at the door of 11 Hope Street. There, a beautiful older woman named Peggy invites Alba to stay, on the house’s unusual conditions: she’ll have ninety-nine nights, and no more, to turn her life around. The enchanted house will help Alba get her life back but, Peggy warns her, it may not give her what she wants. It will give her what she needs. The house, invisible to everyone except those who need it, has had more than a few distinguished guests. Virginia Woolf, Dorothy Parker, and Agatha Christie, among others, all stayed there at hopeless times in their lives and still hang around—quite literally—in talking portraits on the walls.

At Hope Street Alba meets Carmen, a sexy singer who no longer performs, and seems haunted by something that is buried under a plant in the garden with flowers so dark they are almost black. Living with them is Greer, a failed actress who’s hiding a dark secret of her own. But perhaps most mystifying of all is Peggy herself, who entertains her lover on Sundays, eats chocolate cake for breakfast, and holds conversations with the illustrious tenants occupying the house’s walls. As Alba begins to piece her life back together she discovers her own family has been hiding truths from her, truths that will lead Alba to places and people she never knew existed and to a life she never dreamed possible.

Inventive, charming, and filled with a fabulous cast of literary figures, THE HOUSE AT THE END OF HOPE STREET is a wholly imaginative novel of feminine wisdom and second chances, with just the right dash of magic.

Menna van Praag is a freelance writer, journalist, and Oxford graduate. She is the author of Men, Money and Chocolate. She lives in Cambridge, England, with her husband and son.

I have one paperback copy of The House on the End of Hope Street by Menna van Praag to share with my US readers.  To enter…

Open to US residents only
Draw Date April 19/14