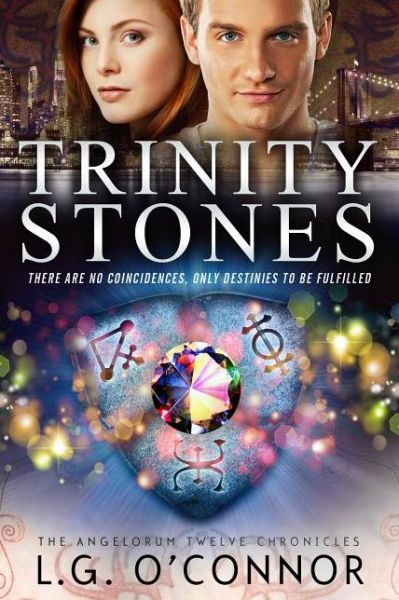 Trinity Stones: The Angelorum Twelve Chronicles by L.G. O’Connor is a blend of fantasy, science, love, the battle between good and evil, and one fantastic read!  I got caught up in this book from the beginning chapters and read it within a day and a bit.  This novel is full of angels, demons, free will, and destiny and it’s sure to please readers who appreciate a fast paced and exciting storyline.  I do have to say though that I don’t think the cover does the book justice.  This book is much deeper than the cover leads one to believe.

Cara Collins is turning twenty-seven and expecting a very quiet birthday with her best friend Sienna but that isn’t what she gets.  Instead she receives a letter from her grandmother who has already passed on telling her that she has a destiny far from what she ever could have imagined.  Cara follows her grandmother’s instructions and learns that she is actually a part of a holy trinity comprised of angels and humans whose goal is to fight evil.  Really!  She can’t believe it.  She’s just a normal woman … isn’t she?  No, it turns out she is a soul seeker.  Things start to change quickly from this point and she meets Michael who is a part of her Trinity as Messenger and they quickly bond.  Then there is her guardian Chamuel who she is forbidden by law to love and yet neither can deny the powerful connection that they share. As things heat up  Cara is horrified to learn that not only her life is in danger but so are the lives of her friends and when her old love Kai is taken by the Dark Ones Cara knows she has to fight to save him and his daughter.  Will her Trinity survive?  Will Kai and his daughter be safe and why is Kai even involved in all of this to begin with?  Can good conquer evil?

L.G. O’Connor builds a great fantasy world.  The beginning of the novel can be a bit confusing as the reader is introduced to a lot of different terms and names but as you continue to read it all becomes much clearer.  I liked Cara though from the beginning because of her love for her dog and for putting her slimy boss in his place before she walked out the door.  As the story progressed though I liked her even more for her willingness to give up everything for the safety of her friends and for love.  While Cara was my favorite character I also liked her friend Sienna who was quite funny at times.  Of course one can’t fail to mention the very hot men inhabiting the pages of this book and I certainly wouldn’t mind one of them walking into my fantasy.  LOL.  Ultimately the story is about the battle of good and evil and love conquering all.

Trinity Stones is the first in the series with The Wanderer’s Children coming in the Fall of 2014 and I’m really excited to read it and see what’s next for Cara, Simon, and the rest of the crew!  As a note there is language and sexual content in this novel that I know some of my readers are uncomfortable with – not a lot but some.  As for me I thoroughly enjoyed Trinity Stones and anxiously await the next book!

I have one paperback copy of Trinity Stones by L.G. O’Connor to share with my readers.  To enter…

Open to US and Canadian residents
Draw Date April 19/14