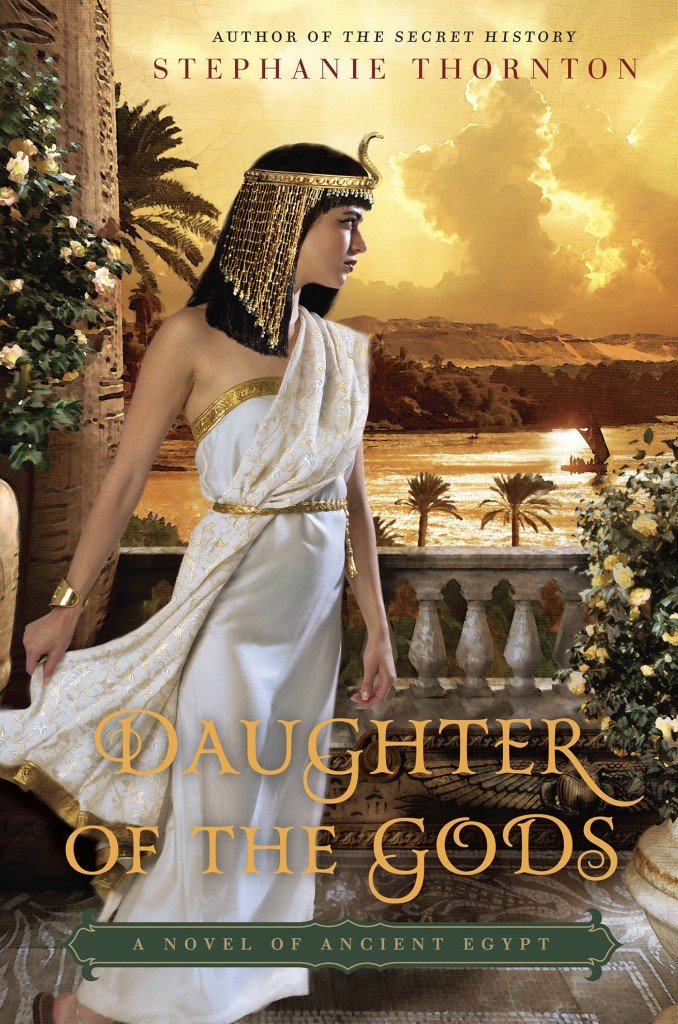 Daughter of the Gods by Stephanie Thornton chronicles the life of Hatshepsut who has led a privileged life wanting for nothing but when her older sister who she loved dearly is killed Hatshepsut’s world changes forever. Suddenly it is now up to her to be married to her brother as is the custom and become Great Royal Wife when he becomes Pharaoh. Her one goal is to produce a male heir and while Hatshepsut doesn’t argue that point she also knows she wants much more than that. She wants to stand beside her husband Thut and rule Egypt. Yet it is man’s world and as Hatshepsut says herself she is trapped in a woman’s body. If only she were a man she would be able to do anything she desired. Still Hatshepsut isn’t one to be deterred easily and she begins to offer opinions and suggestions whenever she can as Thut proves himself to not be much of a leader. Marriage to her brother proves difficult as Hatshepsut doesn’t love him like a woman should love a man and it doesn’t come as any surprise when she loses herself in the affections of a man, Senenmut, who does have her heart.

In the meantime Hatshepsut seems unable to become pregnant and produce a male heir but another of Thut’s wives, Aset, does bear a boy child. Desperate to become pregnant with an heir Hatshepsut turns to an old witch woman who supplies her with herbs to quicken her womb. It is what she tells Hatshepsut though that is most troubling. She tells her that she while she will succeed and Egypt will prosper all those that are close to her and that she loves will suffer. Hatshepsut becomes incensed with this woman and sends her away but her words to Hatshepsut never fall far from her memory especially as things begin to happen in her life that lead her to believe the prophecy may indeed be true. Thus begins a journey for Hatshepsut that takes her from the heights of power to the lowest of lows. It is a journey sure to captivate any historical fiction fan!

Daughter of the Gods by Stephanie Thornton is a look back to the life of a forgotten woman in history, Hatshepsut, who was Egypt’s first female Pharaoh. Despite holding this esteemed position sometime after her rule as Pharaoh somebody went to great lengths to erase her fully from any historical record. Thankfully she wasn’t fully removed from all history because Hatshepsut is a fascinating and strong woman. She was one of those women who belonged in the modern world not 1400’s BC. I really admired her strength, determination, and intelligence and especially the fact that she wasn’t scared to show that she was smart and capable of ruling Egypt on her own. I had heard of Hatshepsut before but not to the depths of this novel so I have to say that I greatly appreciated learning quite a bit from this novel not to mention the fascinating and vivid detail of life in Egypt at this time in history.

I was completely swept away to another world with Daughter of the Gods and can’t wait to read Stephanie’s previous novel too. Recommended for historical fiction fans!

I have one paperback copy of Daughter of the Gods by Stephanie Thornton to share with my readers.  To enter…

Source:  Digital review copy provided by the publisher.  No compensation was received and all opinions are my own.