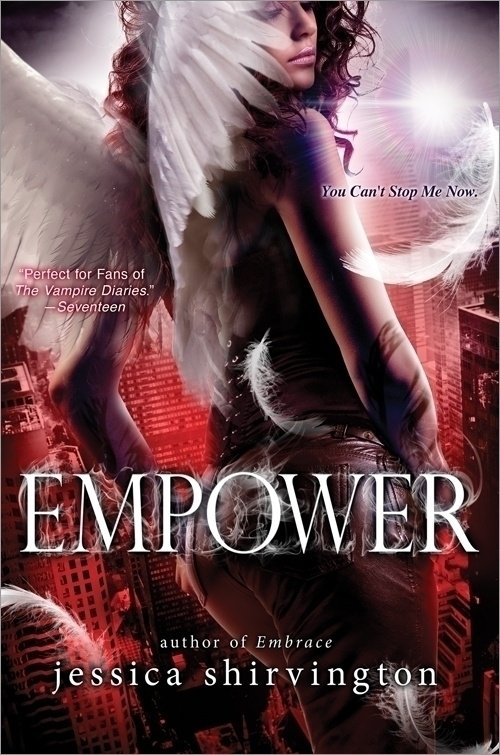 Empower is the fifth and final book in the Embrace Series by Jessica Shirvington and it was as awesome as all the others were and a fitting end.  As I was reading though I couldn’t help but be sad that this was the end.  I’ve grown attached to these characters and their lives and saying a final goodbye is hard.  The Embrace series is a fantasy series all about the battle between good and evil and Empower is the final and ultimate battle.

I’m going to try hard not to put any spoilers out there but as each story builds on the other it may be hard not to say a little bit.  At the end of the last book Endless Violet left everything behind to become the best Grigori warrior she could be.  She left  her friends, the Academy, her family,  but by far the hardest was leaving her soul mate Lincoln behind but she had to do it.  She’s spent most of her time fighting Exiles as a Rogue Grigori.  However when she receives news that someone dear to her is missing she knows that she has to go back to the Academy and find any way she can to bring him home.  Going back to the Academy though also means seeing Lincoln again and Violet isn’t sure how she’ll be able to handle that.

Violet has to be one of the best characters and one of my favorites of any series I’ve read.  She’s strong, independent, and fiercely loyal.  It’s been amazing to watch her grow over the past years as I’ve read my way through the series.  Each book found her really coming into herself and her power.  Lincoln as well grew in this final book.  He’s realized that he has to trust Violet to know what’s best for her – that she can handle things without his help all the time.  Mostly though I like that the two of them grew together in both love and understanding of each other.  Their romance is one thing that I’ve really enjoyed in this series because it has always been good and pure.  Another thing that has always impressed me about this series and in particular this final book is the beautiful writing of Jessica Shirvington.  She can take battles, fighting, and death and write about with such class that it amazes me and when she writes of love and soul mates it touches a person’s heart.

Empower is a great end to a series I won’t forget.  I recommend the whole series if you enjoy fantasy novels but especially to young adult readers.  I have to mention as well that I listened to the audiobook which is narrated by Rebecca Macauley and she is nothing short of fabulous in the narration of these books.  I’ve listened to the last 3 books in the series because of her.  I love her accent and all the emotion and effects that she puts into telling these stories.  She brings alive the world that Jessica Shirvington built in a most exciting way!  Either way I recommend the whole series either in print or audiobook – it really is a memorable series!  Loved it  and very sad to see it over!

Source:  Digital review copy was provided by the publisher but audiobook is from my own personal library.  No compensation was received for this review and all opinions are my own.