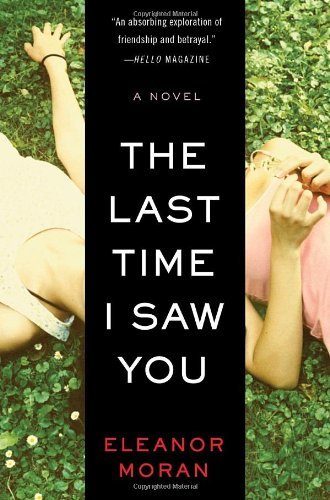 The Last Time I Saw You by Eleanor Moran is a story about the friendships we have that may not be the healthiest for us and the secrets that lie below the surface of things that have the power to change what we think of our closest friends.

This story flashes between the past and present starting with Olivia and Sally as university roommates. Sally was one of those people who needed everyone around her to worship her and if that didn’t happen she got mean. For many years Olivia did just that though sometimes she knew it was craziness. Finally, after being inseparable for years, an unforgivable betrayal occurs and the friendship ends.

Fast forward to the present and we find that both women are living in different countries and have had virtually no contact. When Olivia learns that Sally has been killed in a cars crash she finds herself feeling regret over not having tried to mend her friendship with Sally. Most puzzling is that despite the women having no contact Sally chose to name her daughter after Olivia.

So when Sally’s husband asks Olivia to share her stories about Sally she agrees hoping it will help her to understand what happened with her and Sally better. While going through Sally’s things Olivia finds something that opens Sally’s life up to her in a way that shocks her while leaving her understanding her old friend in a different way. All the while she also finds herself becoming closer to Sally’s husband and daughter.

While I enjoyed this book I found that I couldn’t warm to Sally or Olivia maybe because of the choices they made. The story though is a good one with a troubled woman, mental illness, unhealthy relationships, and dealing with and moving on from a death with it all culminating in a story that definitely kept my interest.

The novel is a long one at almost five hundred pages but I listened to the audiobook which seemed to breeze by quickly. It’s narrated by Lisa Coleman who is a new narrator foe me but one I really enjoyed listening to. I felt she brought an added element to this story that kept me listening.

Source:  Digital review copy was provided by the publisher however the audiobook is from my personal library.  No compensation was received and all opinions are my own.