I am really excited to welcome one of my favorite authors to the blog today and that is Lynn Cullen who is currently touring with Historical Fiction Virtual Book Tours.   I have been reading and enjoying her books for years and her latest Mrs. Poe further proves what an amazingly talented author she is as I loved it (check back tomorrow for my review).  Lynn was kind enough to take the time to answer my questions today so please enjoy and be sure to enter the giveaway as well for a chance to read this fantastic novel! 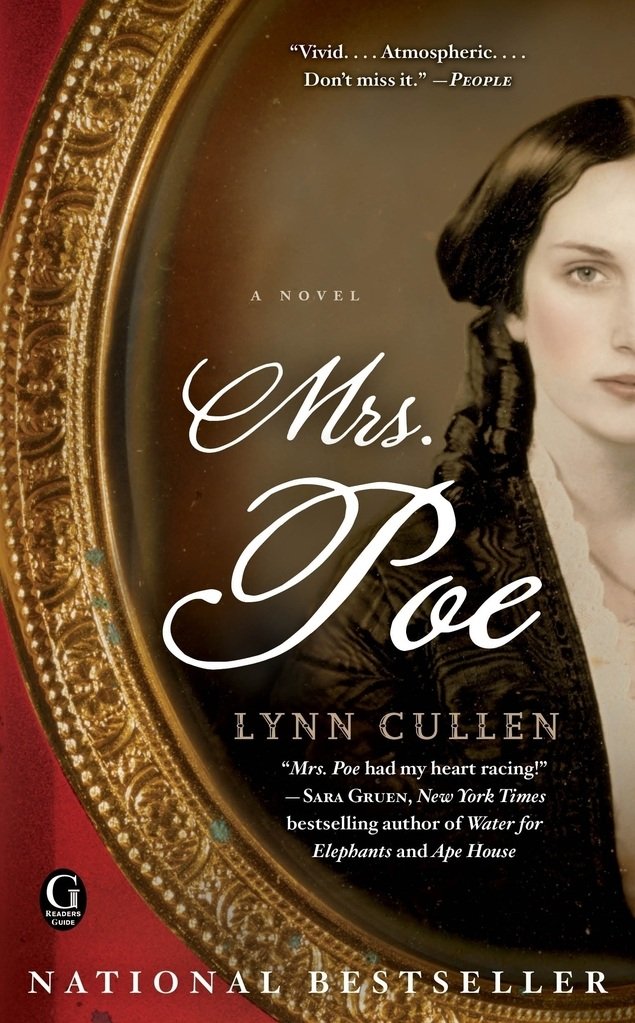 1. Welcome to Peeking Between the Pages Lynn! I know you’re an amazing writer but can share a bit about yourself outside of your writing career?

Thanks for having me on board today, Dar! I’m honored to be here and am looking forward to the questions you lob my way. This first one is a doozie, since I have been so wrapped up in writing my whole life that I can hardly picture who I am beyond it. I’ve been writing since I was a kid and in many genres. As you know, I started out writing children’s books when my own kids were young, and have grown, as they grew, into doing the kind of writing that I was always meant to do–“mainstream” historical fiction. (“Adult” fiction sounds a wee bit racy.)

Outside of writing, you could say that I am a historical detective. I travel the world to hunt down clues to my characters and their times. I’ve never let distance or cost scare me away from exploring—I learned early on how to travel on a shoestring. (Hint: In Europe, stay in small B & B’s or clean but no-frills family-owned hotels in historic areas and travel off-season.) I got my start in this direction with Rick Steves’s books on cheap European travel.

2. I’m a huge fan of your novels! Can you tell us a bit about your newest novel Mrs. Poe and what your inspiration for it was?

Aw, thanks. I really appreciate your support over the years! My newest, Mrs. Poe, came about after I took a crash course on Poe, (okay, I read Wikipedia ,) and learned that he wrote ‘The Raven’ in 1845. That same year he was alleged to have had an affair with Frances Osgood, a fellow poet. Upon closer investigation, I realized that in the space of one year, Feb. 1845 to Feb. 1846, Poe went from the pinnacle of the success that he had yearned for his whole life to failure and rejection. What could have caused such a meteoric rise and fall? I wrote Mrs. Poe to answer this question. I believe that Frances Osgood is the key.

3. What challenges did you face in writing Mrs. Poe?

My biggest challenge was to rehabilitate Poe’s personal image to bring it in line with the man he actually was. The commonly held modern view of Poe as an alcoholic creepy guy is actually the result of the worst smear job in literary history. In a bizarre twist of fate worthy of one of Poe’s own stories, in real-life, Rufus Griswold, the very man who hated Poe most in life became the keeper of Poe’s papers after Poe’s death. Griswold began doctoring Poe’s letters the moment he got his hands on them, filling them with falsehoods. He proceeded to write a completely slanderous and false biography of Poe. In Griswold’s hands, Poe became the madman of Poe’s ownstories, with the additional unsavory attributes as drug and alcohol addiction and a tendency toward violence.

In real life, in 1845, when “The Raven” came out, Poe was known to be gentlemanly, polite, and charming, a genuine ladies man. With his wit and excellent manners, as well as his sexy reading voice, he was in demand in drawing rooms all over Manhattan, where he lived at the time. It was only after he fell out of favor with the social elite for having had an affair with one of their own, Frances Osgood, that Griswold could manipulate Poe’s image. Few would step forward to defend Poe after he had become social poison.

This portrait drawn from life shows Poe as he really was in 1845. It was my job in Mrs. Poe to acquaint readers with the charismatic gentleman Poe actually was. 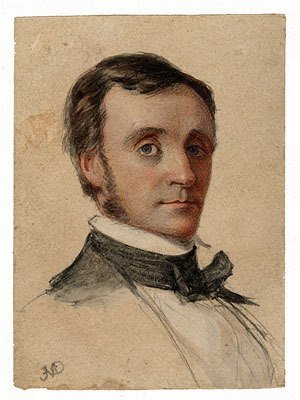 4. Of all the novels you’ve written do you have a favorite or has each been a new experience to enjoy and watch unfold as you write?

Novels are like children in that you love each one “the best.” Each one is a favorite because of their uniqueness. I have adored being taken into the worlds of each of my four novels: I am Rembrandt’s Daughter, (centered around the masterpieces of the great painter’s final years and told by his illegitimate daughter); The Creation of Eve (about Sofonisba Anguissola, a student of Michelangelo and painter to the Spanish queen Elisabeth of Valois, Catherine de Medici’s daughter): Reign of Madness (about Juana “the Mad,” daughter of Isabel and Ferdinand and contemporary–and possibly more?–to Christopher Columbus’s son, Diego); and Mrs. Poe. Each book was an immersion course in the history and lives of these famous people, as well as an exploration into aspects of the human condition. Through these books, I have become part Dutch/Italian/Spanish/Belgian/Manhattanite—pretty fun for a girl from a blue-collar neighborhood in Fort Wayne, Indiana.

5. Do you have any set routines of when you like to write or where? Is there a special spot where you do your best writing?

I try to write 8 hours a day, not that they are a productive 8 hours. There’s a lot of snack-eating, bird-watching, plant-watering, dog-petting, and cat-feeding going on. But I do try to devote all day in pursuit of some actual creation of new sentences. The preferred place of action is in my zero-gravity lawn chair on the patio. I’m outside most days of the year until I’m either fried, frozen, or flooded. You’ll notice that birds are often in my books. It’s because I’m usually writing among them. They keep working their way into bit parts.

6. On a personal note… what do enjoy doing most when you aren’t writing?

Savoring the boom of grandchildren in town: I’ve got grandkids ages 4,3,2, and 1. I’m happiest when hanging out with them and my three daughters, who have become my best friends. I love traveling, too, but hate that it takes me away from family, including the four-legged members.

7. A question I always like to ask is what books are on your nightstand right now? I love to know what my favorite authors are reading!

I’m reading a book that’s to debut in January 2015, Before I Go, by Colleen Oakley. It’s about a 27-year old woman with cancer who tries to find a wife for her husband. I love Colleen’s fresh voice.

8. Finally, what’s next on the writing table next Lynn? Do you have another book in the works? ( I sure hope so!). Also, is there anything else you’d like to share with your readers – old and new?

I’m working on a book about Mark Twain. I am wondering what becoming Mark Twain did to the person Samuel Clemens–and what his daughters, wife, and secretary thought about that.

Before I go, may I share one last thing with readers? Friends, thank you for enabling me to pursue my lifelong dream of writing books. Your faith in me and your support humble and awe and delight me. I do not take for granted your trust in me to write as honestly and searchingly as possible. Connecting with you through words is a privilege that I treasure with every fiber of my being and thank you for every time I sit in this writing chair.

Thanks so much Lynn for taking the time to answer my questions and spend some time at Peeking Between the Pages!  I will certainly be anxiously awaiting your next novel!


Thank you for this opportunity, Dar, and for your generous support over the years. It was such a treat to chat with you today!

A vivid and compelling novel about a woman who becomes entangled in an affair with Edgar Allan Poe—at the same time she becomes the unwilling confidante of his much-younger wife.

It is 1845, and Frances Osgood is desperately trying to make a living as a writer in New York; not an easy task for a woman—especially one with two children and a philandering portrait painter as her husband. As Frances tries to sell her work, she finds that editors are only interested in writing similar to that of the new renegade literary sensation Edgar Allan Poe, whose poem, “The Raven” has struck a public nerve.

She meets the handsome and mysterious Poe at a literary party, and the two have an immediate connection. Poe wants Frances to meet with his wife since she claims to be an admirer of her poems, and Frances is curious to see the woman whom Edgar married.

As Frances spends more and more time with the intriguing couple, her intense attraction for Edgar brings her into dangerous territory. And Mrs. Poe, who acts like an innocent child, is actually more manipulative and threatening than she appears. As Frances and Edgar’s passionate affair escalates, Frances must decide whether she can walk away before it’s too late…

Set amidst the fascinating world of New York’s literati, this smart and sexy novel offers a unique view into the life of one of history’s most unforgettable literary figures. 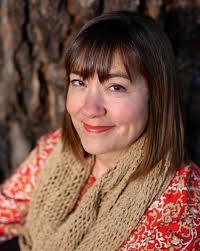 Lynn Cullen grew up in Fort Wayne, Indiana, the fifth girl in a family of seven children. She learned to love history combined with traveling while visiting historic sites across the U.S. on annual family camping trips. She attended Indiana University in Bloomington and Fort Wayne, and took writing classes with Tom McHaney at Georgia State. She wrote children’s books as her three daughters were growing up, while working in a pediatric office and later, at Emory University on the editorial staff of a psychoanalytic journal. While her camping expeditions across the States have become fact-finding missions across Europe, she still loves digging into the past. She does not miss, however, sleeping in musty sleeping bags. Or eating canned fruit cocktail. She now lives in Atlanta with her husband, their dog, and two unscrupulous cats.

Lynn Cullen is the author of The Creation of Eve, named among the best fiction books of 2010 by The Atlanta Journal-Constitution and as an April 2010 Indie Next selection. She is also the author of numerous award-winning books for children, including the young adult novel I Am Rembrandt’s Daughter, which was a 2007 Barnes & Noble “Discover Great New Writers” selection, and an ALA Best Book of 2008. Her novel, Reign of Madness, about Juana the Mad, daughter of the Spanish Monarchs Isabella and Ferdinand, was chosen as a 2011 Best of the South selection by the Atlanta Journal Constitution and was a 2012 Townsend Prize finalist. Her newest novel, MRS. POE, examines the fall of Edgar Allan Poe through the eyes of poet Francis Osgood.