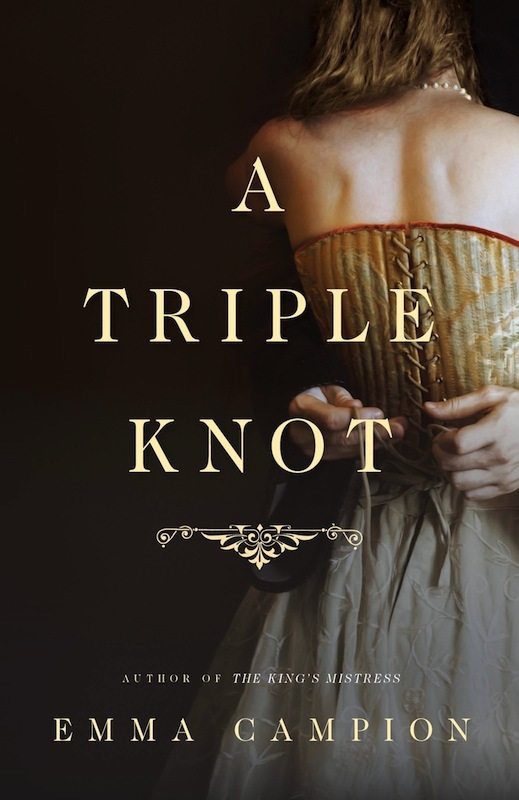 A Triple Knot by Emma Campion is a novel that brings Joan of Kent alive. This novel is rich in historical detail while at the same time weaving a fictional tale that takes us back in time to relive Joan of Kent’s days as they might have been.

Joan of Kent by all accounts was a beautiful woman who turned heads anytime she entered a room. She is of royal blood being cousin to King Edward III and as such is in line to be used as a political pawn in a marriage to benefit the kingdom. Ultimately though the man that the king chooses for Joan is not a man she can bring herself to marry and not only because the man makes her terribly uncomfortable. Joan’s heart belongs to someone else – one of the king’s knights and this is one union that must be kept secret as Thomas is not the kind of man a woman of royal blood should marry. However when she is forced to marry another man she realizes quickly that no one has any intention of acknowledging her betrothal to Thomas. It is just the beginning of Joan’s struggle to return to her one true love – Thomas.

As the story evolves we follow Joan’s journey through her loveless marriage to Will who she was forced into marrying. We also witness her struggles with her cousin The Black Prince who has been set on having Joan as his queen from the time they were children. We experience the travails of war, the sea voyages that Joan dreads, and everything else that encompasses this historical period in time. Ultimately though will Joan be with Thomas, the love of her life?

I had heard of Joan of Kent before reading this book as well as many of the other characters but I didn’t know a lot of her. I feel that the author really brought her alive in this book and I felt as though I was there seeing it all as it happened. I thought Joan to be a strong woman who was also intelligent. It’s sad that women were forced into marriages as political pawns and so many never had the chance to know true love.

I really enjoyed A Triple Knot just as I did Emma Campion’s A King’s Mistress which I read a few years back. If I had one complaint about the book it would be that at times I thought it a bit drawn out but for the most part I was completely engrossed in the story. Recommended for historical fiction lovers!

Source:  Digital review copy was provided by the publisher.  No compensation was received for this review and all opinions are my own.