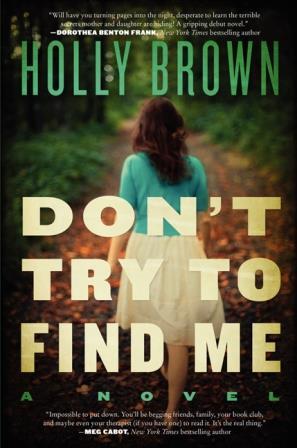 Don’t Try to Find Me by Holly Brown highlights a parents worst nightmare; that of a missing child.  When Rachel drops her fourteen-year-old daughter Marley off at school one morning she certainly doesn’t expect to come home to find Marley gone and a note from her saying don’t try to find me.  Yet Marley is indeed gone and it is quickly determined that she got on a bus and left … but to where?  Rachel can’t believe that Marley would run away.  She’s just not that kind of girl but as Rachel starts digging into Marley’s life a little more she soon realizes her daughter may have been having a lot of things going on that may have made her unhappy enough to leave.  It also becomes apparent that the police aren’t going to be a lot of help so instead Rachel and her husband launch a media campaign in an effort to find her.  Unfortunately this goes awry and suspicion soon falls on Rachel.

As for Marley her story is only too real.  She meets a guy online on Facebook.  He says he’s friends with one of her friends and they start talking.  Soon enough Marley is sharing everything with him and they begin plotting her escape from her parents and her life.  When this guy picks her up though she begins to notice a few things about him that aren’t as he had portrayed and she starts getting more and more suspicious of him.  When things begin to get even crazier Marley realizes that she may have made one of the biggest mistakes of her life… but is it too late?  This story is one we hear of a lot nowadays.  So many kids are lured away on the internet and it’s downright scary.  Add to that a family life that isn’t as it should be and you have a recipe for disaster.  Marley’s parents were so involved in themselves that they weren’t taking the time to notice what may have been going on in their daughter’s life.  Take one insecure girl and a creep and that’s another recipe for disaster.

I enjoyed this book.  I listened to the audiobook which is narrated by Hillary Huber, Angela Goethals, and James Fouhey and I really think they added to my enjoyment of the book in bringing fear, defeat, anxiety, tension – so many emotions to each and every scene in the book.  My only complaint of the story is that, to me, Marley did not seem to act as I think a fourteen-year-old would.  She seemed much too mature for her age and that at times had me disbelieving some parts of the story.  Overall though I really liked it and I was hooked on the audiobook for sure.

Recommended for those who enjoy stories of family and marital dysfunction as well as books that deal with the dangers of the internet and teens.

Source: Digital review copy provided by the publisher. Audiobook from my personal library. No compensation was received for this review and all opinions are my own.