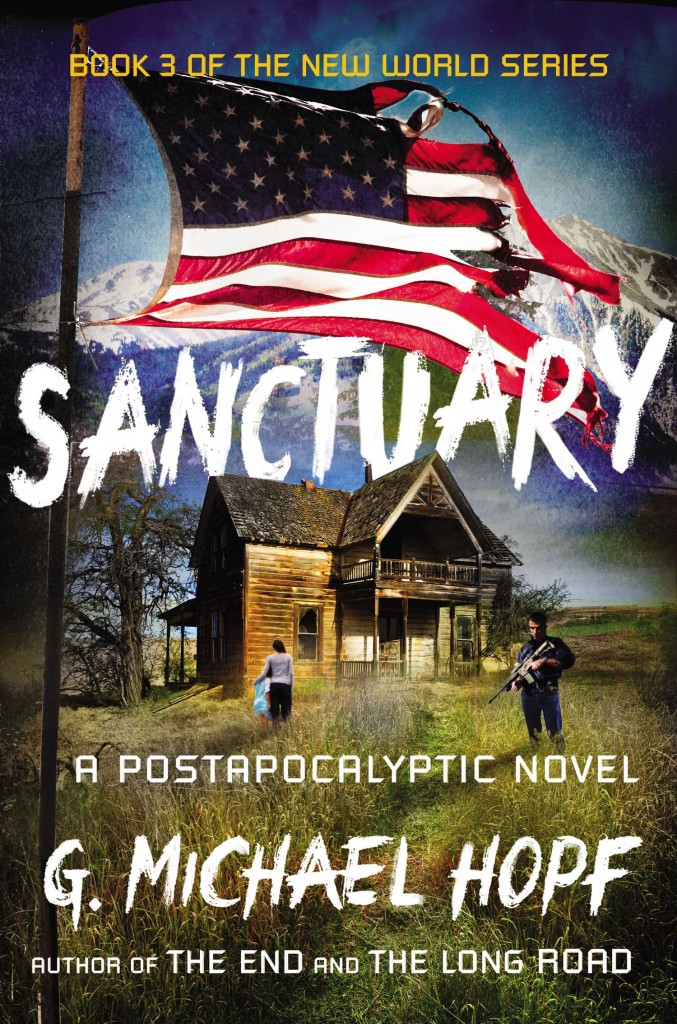 Sanctuary: A Post-Apocalyptic Novel by G. Michael Hopf is the third book in The New World Series and in my opinion the best yet. That’s not to say I didn’t enjoy the first two books – The End and The Long Road, because I sure did but I just seemed to connect more with the people in this one making it so much better for me. Sanctuary is an intense and action packed read with wars being raged and people struggling to make it in this new world they’ve been thrown into after the world as they knew it suffered a super-EMP attack.

As this is the third book in the series I don’t want to give anything away so my thoughts may be a bit vague. Sanctuary finds Gordon on a mission of revenge for the loss he’s suffered but in doing so he’s had to leave his family behind. He’s the same Gordon who usually takes action before asking questions but he’s usually right in doing so. However in this novel we see a more personal side to him and I liked that. As for the rest of the crew – Sebastian, Samantha, Nelson, Connor, Pablo, Barone … all have taken different directions to do what they feel is right in order to survive in this new world.

This series isn’t for the faint of heart. It’s a brutal story with a lot of violence and language but it fits. To me this is likely what would happen if one day we end up in a post-apocalyptic world. People have no choice but to fight just to survive and protect themselves and their families. There are shortages of food and all the necessary things we take for granted. People become very different in those circumstances.

I listened to the audiobook of Sanctuary which is narrated by Keith Szarabjka and I thought he did a great job. I didn’t enjoy the narrator much in the last two books so this move to a new narrator is a good one. Keith really brought this story alive – all of the anxiety fear, tension, and violence – he made it seem like a movie in my head.

For those who enjoy post-apocalyptic novels I recommend this whole series. While you could read Sanctuary on its own I think it’s a much better idea to start at the beginning and get the back story. This is definitely a series that is fast becoming addicting for me and once again it ended on a part that has me already anxiously awaiting the next one!

GIVEAWAY – OPEN TO US & CANADA

Winner will receive a copy of the Entire Series including The End, The Long Road, and Sanctuary!

Source:  Review copy of audiobook was received from the publisher.  No compensation was received for this review and all thoughts and opinions are of the blog owner.