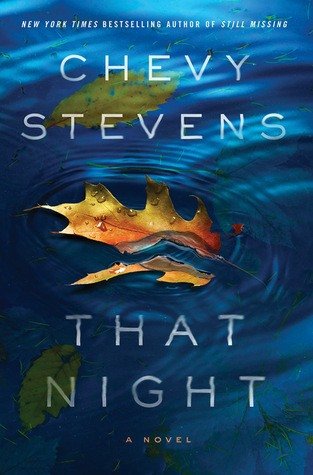 That Night by Chevy Stevens is the She Reads Book Club Selection for July and what a fantastic pick! It is a psychological thriller that highlights the devastating effects of bullying. Weaving from the past to the present That Night grabbed my attention from the first page and didn’t let go.

Toni is your typical teenager … until she isn’t. At home Toni struggles in her relationships with her mom and sister. Her sister is the golden child and definitely the one their mother favours. Things at school were fine until a misunderstanding pits one of the popular girls against Toni making her life hell. If not for her boyfriend Ryan Toni isn’t sure she’d make it through any of it. As the bullying escalates the unimaginable happens and Toni’s sister is murdered. Worse yet Toni and Ryan are accused and sent to prison for the brutal murder.

Years later thirty-four year old Toni is finally out on parole. She goes back to her hometown despite having no contact even with her parents for years and especially knowing that her mother doesn’t want anything to do with her. Ryan also makes the decision to return despite knowing he and Toni can have no contact. Ryan tries to convince Toni to help him find out the truth of what happened and clear their names. Once again things escalate as they get closer to the truth. This time though Toni isn’t the same girl she used to be before going to prison. This Toni came out hardened and tough and she isn’t going down without a fight this time.

I listened to the audiobook of That Night. It is narrated by Jorjeana Marie and I thought she did a great job of portraying all of the characters and the pace of the story. She definitely kept me listening any chance I got! Highly recommended!

Source: Digital review copy was provided by the publisher however audiobook is from my personal library. No compensation was received for this review and all thoughts and opinions are that of the blog owner.