Happy Wednesday everyone!  Sourcebooks is releasing Susanna Kearsley’s novel Season of Storms this September and today I’ve got an excerpt from that novel to share with you all.  There is also a giveaway at the end of the post so make sure not to miss a chance to win a copy for yourself.  I’ve read a few of Susanna Kearsley’s books and I always love them so I’m looking forward to reading this one too. 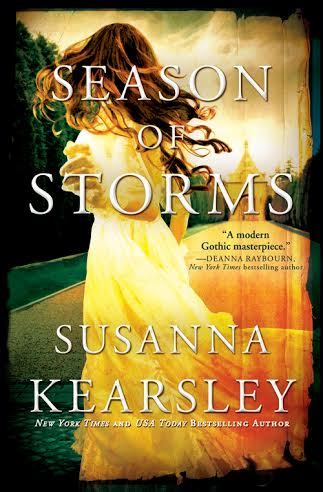 “Why do the rich always build their houses miles from the road?” Den wanted to know. “All they need is a little front yard and a driveway, but no… they have to put in all these columns and
fountains and—”

“Dennis,” Rupert cut in, puffing nearly as much as I was, “if you didn’t waste all your breath complaining, you’d find it easier to walk.”

“Oh, I’ve got plenty of breath,” Den assured him. “That isn’t a problem.” I couldn’t help smiling, even in the midst of my exertions. I couldn’t think of any situation in which Den would cease to talk. Perhaps in sleep, but even then he most likely muttered and tossed in his bed, restless. He was not a quiet man.

I, on the other hand, couldn’t have spoken a word if I’d wanted to. My body needed every bit of oxygen to keep my muscles moving, propelling me up the long drive like an automaton… left foot, right foot, left foot, right foot, each step crunching on the gravel. I kept my head purposely down, focusing not on the way ahead but on the patch of gravel just in front of my feet—a much more attainable goal.

I knew, from my limited, low-angled view of the flowering shrubs and ornate column bases I was passing, that we were walking through a place of beauty. Now and then I saw the feet of a statue resting in the trailing greenery and was tempted to look higher, but I didn’t dare for fear I’d lose my footing. I’d be living here for several months, I told myself. Plenty of time to admire the scenery later. For now, all I wanted was to get up to the house and climb into a bath.

Behind me, Den stopped walking and swore.

I lifted my head then to look, and wished that I hadn’t. I sagged at the sight of the steps—a seemingly endless flight of them, ten feet wide and gleaming white, that angled steeply upwards, barring our way to the house like some cruel architectural joke. Even the lions that stood at its entrance appeared to be laughing.

It might have been the heat, or simple tiredness, but I nearly broke down at that point. And I might have disgraced myself entirely by dissolving in tears at the foot of the steps if I hadn’t just then heard the sure, certain sound of someone coming down to meet us. Looking
up through blurring eyes I saw the outline of a man, a young man, lean and dark and moving swiftly, with an athlete’s grace. Halfway down he waved and called out, “Thought you might need help with those. It’s a bloody long way up.” An English voice, precise and very RADA.

I blinked away my unshed tears and watched with curiosity as Nicholas Rutherford came closer. I’d seen photographs, of course, but never the man in person. He was not as tall as I’d expected, but I didn’t imagine most women would notice his height—it was his face that so entranced them, with its cleanly cut features and laugh lines and soul-searching eyes. And whereas we looked hot and straggly and were on the point of collapse, he looked cool and crisply pressed and managed the final few steps without apparent effort, smoking a cigarette.

“What happened to you lot?” He looked us up and down, amused. “Did Giancarlo make you get out and push, or something?”

“From town. Giancarlo, if that’s who was supposed to meet our train at Desenzano, never showed. We had to take a bus.” Rupert pointed out that we had rung the house. “But apparently your phones aren’t working.”

“It wouldn’t surprise me,” said Nicholas, smoothing his hair with one hand in what I would learn was an habitual gesture of his. “It’s a bit of a madhouse around here today. Here, let me take that.” Putting the cigarette in his mouth he held out a hand for my suitcase. “You’ve only a little bit farther to go and we’ll get you set up with a drink.”

In 1921, infamous Italian poet Galeazzo D’Ascanio wrote his last and greatest play, inspired by his muse and mistress, actress Celia Sands. On the eve of opening night, Celia vanished, and the play was never performed.
Now, two generations later, Alessandro D’Ascanio plans to stage his grandfather’s masterpiece and has offered the lead to a promising young English actress, also named Celia Sands—at the whim of her actress mother, or so she has always thought. When Celia arrives at D’Ascanio’s magnificent, isolated Italian villa, she is drawn to the mystery of her namesake’s disappearance—and to the compelling, enigmatic Alessandro.
But the closer Celia gets to learning the first Celia’s fate, the more she is drawn into a web of murder, passion, and the obsession of genius. Though she knows she should let go of the past, in the dark, in her dreams, it comes back… 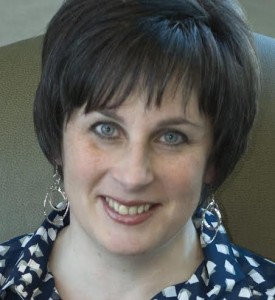 New York Times and USA Today bestselling author Susanna Kearsley is known for her meticulous research and exotic settings from Russia to Italy to Cornwall, which not only entertain her readers but give her a great reason to travel. Her lush writing has been compared to Mary Stewart, Daphne Du Maurier, and Diana Gabaldon. She hit the bestseller lists in the U.S. with The Firebird, a RITA winner (2014), as well as The Winter Sea and The Rose Garden, both RITA finalists and winners of RT Reviewers’ Choice Awards. Other honors include finaling for the UK’s Romantic Novel of the Year Award, National Readers’ Choice Awards, and the prestigious Catherine Cookson Fiction Prize. Her popular and critically-acclaimed books are available in translation in more than 20 countries and as audio books. She lives in Canada, near the shores of Lake Ontario.

GIVEAWAY – US RESIDENTS ONLY

1 copy of Season of Storms by Susanna Kearsley

Source:  Giveaway copy provided by the publisher.  No compensation was received for this post.