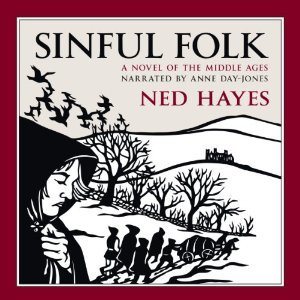 There are many reasons I read and love historical fiction. One is to learn about a time past but another is to be taken away to a time long forgotten. Sinful Folk by Ned Hayes is both. It is a passionate and beautifully written tale taking place in medieval times that tells of the pride and determination of a woman who captured my heart.

It all starts with a devastating fire that takes the lives of four young men living in an isolated village. It is here that we meet Mear, a former nun who has been living as a mute man for over a decade to protect both herself and her son. Now her son is gone, burned in the fire. Along with the other village men she wants justice for her own boy and the others. They then travel many, many miles across England encountering many obstacles in order to exact justice from the King. For Mear this journey is difficult as she is considered an old man now but even more than that she has to make sure to hide her real identity as the consequences for this long told lie would be dire.

As Mear relates the winter journey they have undertaken you can feel her fear both at the hardships of the journey but also of being discovered. As they travel instances arise where Mear is even accused of being a witch, which in medieval times was a death sentence. It becomes increasingly clear that Mear is not who the men thought she was and when they finally learn she is actually a woman and the details of her past they are shocked but will Mear be safe now that they know who she is or is she in even more danger from both the village men and others.  Mear is a beautiful soul and one whose story I won’t soon forget. I felt such a intense connection to her in her strength of character and ability to forgive and forge on in her life. Hers is a story of overcoming adversity made even more admirable by the times in which she lived.

I was lucky enough to listen to the audiobook of Sinful Folk and as is clear I thought the novel amazing but still the narration of Anne Day-Jones made it even more so. She is absolutely the perfect narrator for this medieval tale. She brought alive the time and place and more importantly the characters. I felt as though I was inside this book living alongside the travelers and feeling both their hardships and triumphs.

For fans of historical fiction Sinful Folk is fantastic and if you’re a lover of audiobooks as I am the audio is extremely well done. Highly recommended!