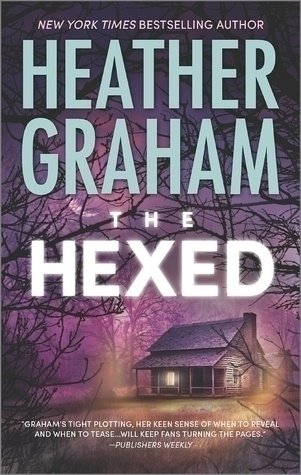 What can be better that witches, ghosts, and a mysterious thriller all set against the backdrop of Salem?  The Hexed by Heather Graham offers all of this and more!  I really liked this book and had such a hard time putting it down for anything.  Things haven’t been the best lately and I’ve been so lucky to have books like The Hexed to escape into.  You know you’re reading or listening to a good book when you’re gasping or talking out loud when things are happening or going to happen and therefore scaring your poor dog a bit.  The Hexed is one of the books in the Krewe of Hunters series but these books all have separate stories and stand alone and I’m more than excited to start tackling them all.

Devin has only recently returned home to Salem after inheriting her great aunt Mina’s old cabin.  Aunt Mina was always considered to be the crazy old lady because she could speak to the dead and yet so many of the women of Salem came to see her.  Devin is loving her time there until she finds a murdered woman nearby her cabin.  Luckily she flags down Rocky, an agent working for the Krewe of Hunters who are the FBI’s paranormal investigators.  Rocky too has a past in Salem having grown up there.  Not only that but when he and his friends were younger they found one of their own friends dead in the woods … exactly the same as this new body so many years later.  What could it mean?  Is the killer after the young women of Salem again and if so why did they wait so many years to commit another murder.

Devin has a few special abilities that she inherited from her great aunt Mina and one of those is the ability to see and communicate with the dead.  Still she is startled when her aunt Mina shows up and begins talking to her like she’d never left.  Needless to say she’s worried about Devin and has every intention of keeping her safe.  When Devin is led to yet another dead woman by a ghost from the long ago Salem witch trials the investigation really heats up.  As Rocky and the team uncover more and more details it becomes apparent that there is a method to the killer’s madness and even more terrifying is that Devin may also be a target.  Rocky can not let Devin be hurt … especially since they’ve developed feelings for each other.  Will he be able to uncover just who the killer is before it’s too late?

This book had my heart a pounding in more than a few places and I loved it.  The characters were great especially aunt Mina.  She was so funny popping in and out.  More than that though I just simply enjoy books like this – ones that deal with anything to do with witches and Salem.  I’ve already started listening to The Cursed which is the book before this one and in the coming months I’ll be reviewing the next one called The Betrayed.  I know without a doubt I’m in for another treat!  I listened to The Hexed in audio and it is really well done.  It’s narrated by Luke Daniels and at first I was leery because I’m not always fond of male narrators but he’s great and had the perfect voice for the telling of this often suspenseful tale.

Highly recommended for those who enjoy thrillers and the supernatural.  I loved it!

1 paperback copy of The Hexed up for grabs!

(comments are welcome! but do not count as an entry)

Source: Digital review copy provided by the publisher. Audiobook from my personal library. No compensation was received for this review and all opinions are that of the blog owner.