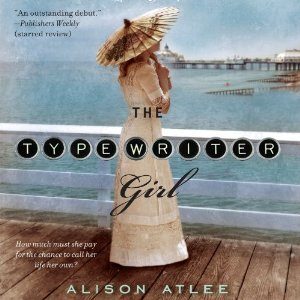 I’m pleased today to kick of Alison Atlee’s debut novel The Typewriter Girl with Historical Fiction Virtual Book Tours. The Typewriter Girl is a journey back in time to the seaside resort of Idensea and into the life of Betsey Dobson. Betsey is a woman who longed for an independent life but living in a man’s world has made that difficult. After being fired from her job as a typewriter girl and having her reputation completely sullied Betsey decides to travel to Idensea where she was previously offered a job and she can only pray it was a true offer. Upon arriving she is thankfully given a job by John Jones managing excursions for the Idensea Pier and Seaside Pleasure Building Company.

Betsey enjoys her new job so much more than that of a typewriter girl. Even though being a typewriter girl was considered the ultimate job for a woman of her time it wasn’t enough for Betsey. Now with this job Betsey can show that she has the ability to do well in business even though she is a woman. Adding a little turmoil to her life is her attraction to John Jones who is seeing a wealthy woman who has much more to offer than Betsey. Yet once again Betsey is a woman not afraid to take what she wants and it isn’t long before sparks are flying between the two. One thing for sure is that John has never met a woman like Betsey and it intrigues him a great deal. Is it enough to bring the two together in love?

This novel is a love story and a pretty good one in that it’s complicated by the personalities of the two main characters of Betsey and John. They can be quite funny in their dealings with each other and I enjoyed the banter between the two. I also really liked Betsey with her independence and strength of character. It’s always a pleasure to read about women who were strong and didn’t want to settle for what it was believed all they were capable of.

All in all I enjoyed The Typewriter Girl. I found it a bit slow in places but still very enjoyable. I listened to the audio version which is narrated by Rosalyn Landor who I love. She is a fabulous narrator who brings so much to the telling of a story. She brought the time and place alive in my mind and she portrayed Betsey’s character perfectly. I don’t know if I would have enjoyed this novel as much in print as I did in audio because of Rosalyn Landor’s beautiful narration of it.

Recommended for fans of historical fiction with a splash of romance.

Source: Audiobook copy was provided for review by the author. No compensation was received for this post and all opinions are that of the blog owner.