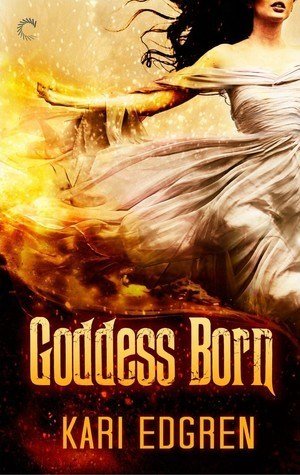 I’m pleased to be kicking of the Historical Fiction Virtual Book tour of Kari Edgren’s novel Goddess Born because I loved it! Just the mention of Goddesses, witchcraft, healers, the paranormal or mythology and I’m all in but Goddess Born is even more than that. It offers up a sweet historical romance, fantastic characters and a wonderful storyline!

The year is 1730 in the Quaker community of Hopewell, Pennsylvania where Selah Kilbrid has been living with her father. Selah is no normal woman though since she is the direct descendant of the Celtic goddess Brigid. Selah lives in constant fear of being discovered for she has the power to heal. This knowledge in the wrong hands could be very dangerous as this kind of power would have people suspecting Selah of witchcraft so she has always been careful to keep her abilities hidden.

However Nathan, a prominent minister, is set on destroying Selah and exposing her as a witch because she has refused his marriage proposal. The only thing that can save her is her betrothal to her cousin Samuel but that hope is crushed when she learns he has died. This leaves Selah in a very dangerous position both as a woman and a half mortal. What can she do though? Marry the awful Nathan? The very thought disgusts her not to mention she would have to give up who she is to do it.

Instead Selah devises a brilliant plan to find an imposter to pose as Samuel. She finds one – an indentured servant – the perfect man to pretend to be her husband. Once the town is convinced they are husband and wife and her birthright is safe then he can disappear and go on with his life and she with hers. Henry, really having no better choices, goes along with Selah. The two bounce between hating each other and seeming to like each other. Could there be more between them? Could Henry ever accept who Selah truly is? Then again maybe Henry has some secrets of his own…

I loved Selah for the strong, outspoken woman that she was and Henry is a great character as well. Another thing that was really nice for a change is that the novel is clean of bad language or sexual content and I found it so refreshing! The only thing I wanted more of was Selah’s abilities and the Otherworld that she would escape to and I’m hoping to get that in the two novels to follow this one – one in November 2014 and one in June 2015. I can’t wait to visit with Selah and Henry again!

If you’re a fan of mythology and historical romances then you should really pick up a copy of Goddess Born. Highly recommended!

Source: Review copy provided by the publisher. No compensation was received. All thoughts and opinions are that of the blog owner.