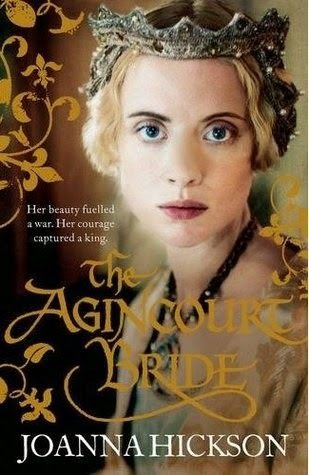 The Agincourt Bride by Joanna Hickson highlights the many reasons I love historical fiction. I was swept away to another time and place and into the life of Catherine de Valois who was the daughter of Charles IV, King of France, and Isabeau of Bavaria, the Queen of France. This novel is rich in historical detail and begins in the early 1400’s at the start of Catherine’s life up until she marries King Henry V, hence becoming the Queen of England. I listened to the audio which is narrated by Catherine Harvey who does an amazing job. I listened every chance I got and in truth breezed through the almost seventeen hours of this audio in no time and loved every minute.

The story is told from the viewpoint of Mette who after losing her own child became nurse to Catherine. At first Mette doesn’t warm to Catherine but it isn’t long before the child has her whole heart and Mette will do anything for her. As unlikely as one would think the royal children were treated horribly by their governess which continued until finally Queen Isabeau showed up and decided that finally her children would be of some use to her in forming alliances. It is then that Catherine finally meets her father who was already considered mad and of course unfit to rule at all. As the story evolves we follow Catherine as she is used to pull in King Henry V yet at the same time suffers at the hands of the Duke of Burgundy and her mother. Ultimately though she is married to King Henry V and that is where this story ends. Lucky enough for us readers there is a sequel in The Tudor Bride coming soon!

Putting court intrigue and politics aside what I loved most about this novel other than the historical aspect was the way it was told through Mette. As a reader I appreciated the details of court life, the look into a royal household, and even into the everyday life of the common folk like Mette. Being told this way the reader is able to form a connection with Catherine because she seems so real and vulnerable in the circumstances. As always the treatment of women in these times horrifies me. They had no say over anything and being royal really gave no benefit as they were used as pawns and subjected to giving in to whatever was wanted for them. The author very vividly portrays the brutality of the time period and along with her descriptiveness on the overall happenings of the time I felt as though I had taken a step back in time.

I really enjoyed The Agincourt Bride and can’t wait to get my hands on The Tudor Bride. Highly recommended for lovers of historical fiction!

Source: Audiobook from my personal library.  No compensation was received and all thoughts and opinions are that of the blog owner.