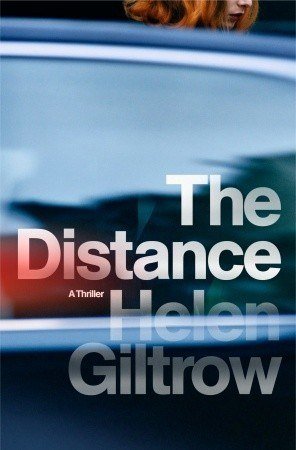 The Distance by Helen Giltrow is one of the She Reads Books of Fall and it is one fast paced ride through a pretty gritty world. This is one of those books that has you wondering at every second  just what will  jump from the page next.

In the public eye Charlotte is a society woman but in private she becomes Karla. In her life as Karla she specializes in information. She can find out anything, she can change data, she can literally do pretty much anything with a person’s life including making them disappear. What she does is not considered to be legal which is why it is so secretive so when someone from her past – Simon – shows up Karla knows something is up. Simon is a hired killer and he wants into The Program. The Program is a unique prison in that it is set up as a self-regulating village and Simon wants in. Can Karla get him in? Can Simon find his target and make it out alive?

The Distance is a fast paced thriller that really doesn’t give you a moment to breathe. Both Karla and Simon are great characters but because the book is basically plot driven you never really get to know them therefore the connection there is lost but really not important in this type of story. You know when you watch a horror movie and put your hands over your eyes – well that’s how I felt reading. I kept thinking to myself that these people were all crazy for putting themselves in such situations yet I kept listening. My only complaint is that I found the beginning hard to get into and until I got a grasp on who was who and what they were up to I wasn’t sure I would keep listening but when this story took off it did so in a big way!

I listened to the audiobook of The Distance which is narrated by Rachel Atkins and I thought she did a great job with this book. She had the right tone for the weightiness of the violence and secretive nature of what was going on. I hadn’t listened to her before but I would again. In the beginning when I was having trouble getting into the story it’s her narration that kept me going! One note though is that this is a very graphically violent book so it is most definitely not for the faint of heart so beware. If you’re a fan of heart pounding action then The Distance is the book for you.

Check out other reviews over at She Reads
Buy at: Amazon, Amazon Canada, B&N, Audible

Source: Audiobook was provided for review by the publisher.  No compensation was received for this review and all thoughts and opinions are that of the blog owner.